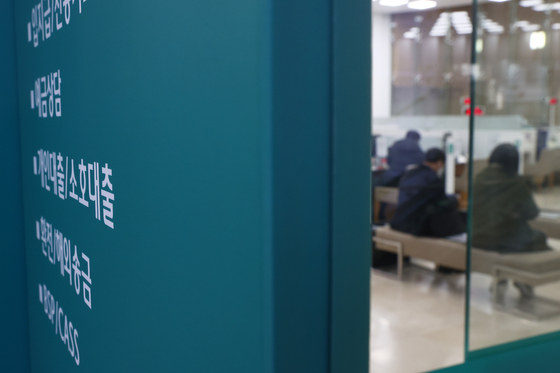 Customers wait for their turn to discuss loan programs at a local bank in Seoul. [YONHAP]


Household debt to banks grew by a record amount last year, increasing by over 100 trillion won ($90.7 billion), as people borrowed to purchase properties and stock and to cover living expenses during the coronavirus pandemic.

According to a report by the Bank of Korea (BOK) Thursday, annual household debt to banks increased by 100.5 trillion won last year to 988.8 trillion won. Over the last five years, yearly debt increases have mostly been around 60 trillion won, except last year. 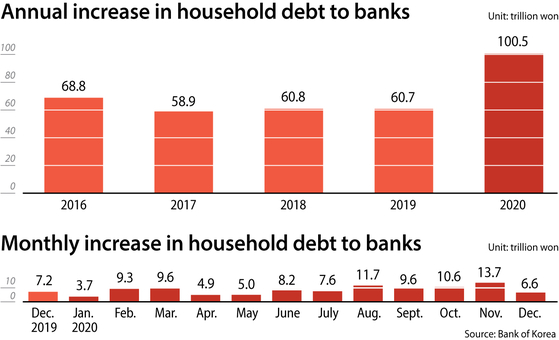 "Last year, house purchases increased overall," said Yoon Ok-ja, an economist in the financial market affairs team at the BOK. "There were also demands for living expenses during the Covid-19 pandemic and those borrowing money to participate in initial public offerings."

By month, the debt increase last month was 6.6 trillion won, only about half the 13.7-trillion-won increase in November when monthly lending peaked.

The restriction applies to people who earn more than 80 million won a year and borrow more than 100 million won in unsecured loans. For them, a 40-percent debt service ratio has been put into effect, meaning yearly payments on a loan cannot exceed 40 percent of the borrowers' salary.

The central bank said there was also a seasonal effect in the decline of unsecured loans, as people try to pay off debt with year-end bonuses.

Most of the lending last month was through housing mortgage loans.

"Due to a recent rise in housing prices, housing mortgage loans grew," Yoon said. "From October, house purchases have been increasing and [lump-sum deposit] prices have also been on the rise."

According to data from the Ministry of Land, Infrastructure and Transport, 51,000 houses were sold in September, 67,000 in October and 89,000 in November, showing a steep increase.

Household debt to all financial institutions, including insurance companies and non-bank companies specializing in lending, increased by 112 trillion won last year according to data from the Financial Supervisory Service on Thursday.

Last month alone, household lending increased by 8.5 trillion won, less than half of the 18.7-trillion-won increase in November.