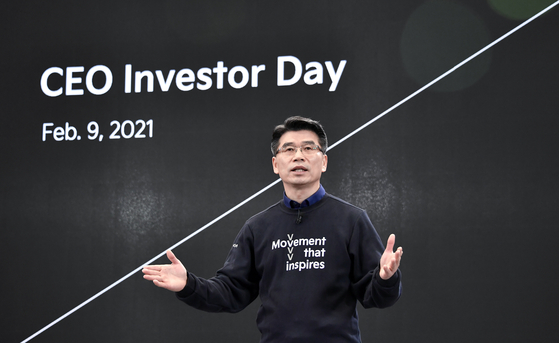 The carmaker said that its all-battery EV business, which has been recording losses after the electric version of Soul was released in 2014, started breaking even in late 2020.

“We have now passed the initial deficit period and will enter the profit-making period with the introduction of the CV,” Joo Woo-jeong, CFO of Kia, said during an online investor relations event held Tuesday. The CV is a new EV that the company will be releasing later this year.

Kia plans to achieve that by increasing parts sharing with the internal combustion engines to reduce costs and boosting efficiencies in sales channels. The scheduled introduction of new EV models will also help in achieving economy of scale, the CFO said.

The company moved up the timeline for seven new EV models and four electric variants of existing models to 2026 from 2027.

First to hit the market is what’s known as CV, which will be available in July. Kia says the CV, which is able to run more than 500 kilometers (311 miles) on a single charge, will reach speeds of 100 kilometers per hour (62 miles per hour) in three seconds.

Purpose-built vehicles (PBVs), mobility solutions that fulfill specific purposes, such as logistics or shuttles, will be one of three core pillars of Kia’s future businesses next to EVs and mobility services.

Kia says it will offer its first PBV, the PBV01, next year. The company plans to dominate the market by 2030, selling one million PBVs per year.

In order to bolster its mobility services, Kia said it will expand its Spain-based WiBLE car-sharing service by accepting corporate clients in addition to individual customers. Kia Flex, a subscription service in Korea, will expand to Europe this year.

It revised operating the profit margin target for 2022 which was set at 5 percent to 6.7 percent.

Joo said the margin target will be the result of the improved profitability of its EV business as well as a fortified sales mix that will include more recreational vehicles and balanced growth in developed and emerging markets.

Kia investors went through a rough day on Monday as the company said it currently is not in talks with Apple for the highly anticipated Apple car.

The investors relations event made no mention of the Apple car.

Kia’s shares plunged by nearly 15 percent on Monday upon the potential breakup in the deal.

It closed at 1.63 percent lower than the previous trading day on Tuesday.