The coronavirus pandemic has forced people all over the world to stay home, safely distanced from family and friends. Koreans desperate for a chance to socialize are now turning to a new American social media app — Clubhouse.

Clubhouse, an invite-only, audio-based social media platform developed by California-based start-up Alpha Exploration, allows users to start and join a conversation room — which is similar to a conference call — with some people talking and most people listening. Users can start their own room or enter a room they are interested in, as well as "follow" others on the app and check if they are involved in any chats.

People who wish to speak during a chat can virtually “raise a hand" to get a chance to talk.

No typing, recording or screenshots are allowed and people are only able to communicate by voice. Users are welcome to enter any room they want, but the number of participants is capped at 5,000 per room.

What makes Clubhouse stand out from other social networks is that it is invite-only. People have to be invited by friends or acquaintances in order to join the app. A new user initially gets two invites. 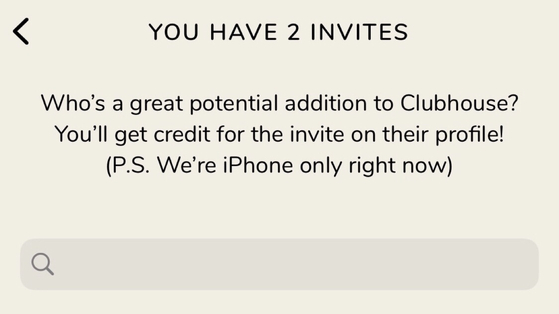 New users to Clubhouse initially get two invites. The app is currently available only on iOS and the company said it is developing an Android version. [SCREEN CAPTURE]


One of the features that immediately boosted the app's popularity in Korea is that many heads of Korean companies and celebrities have already joined, participating in rooms and even performing the occasional mini concert for the people who happen to be in the same room.

Lee Seung-gun from Viva Republica and Kim Bong-jin of Woowa Brothers recently held a talk on the app, and popular singers Song Min-ho and Lee Hi have also joined. Singer Horan of the experimental band Clazziquai recently performed on the platform.

"I feel connected to celebrities and influencers when I am in the same chat room with them,” said Yu Jin-sil, a 30-year-old marketing manager and active user of Clubhouse. “I have entered many chat rooms when CEOs and celebrities were there, and actually ‘raised a hand’ and told them that I’m a fan. I think it’s really good that anyone can be a speaker in the chat room.”

The fast-growing popularity of the app has even pushed some people to pay to get an invitation code. On Danggeun Market and Joonggonara, popular secondhand stores, an invitation code for Clubhouse is being sold for about 20,000 to 30,000 won ($18 to $27). 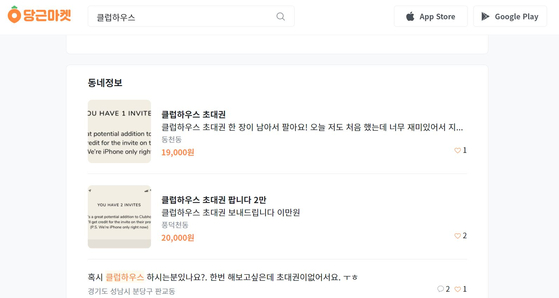 On Danggeun Market, a community-based app where people buy and sell secondhand goods, an invitation code for Clubhouse is being sold at about 20,000 won ($17.90). [SCREEN CAPTURE]


First developed in March 2020, Clubhouse was not that popular at first, but suddenly went viral after major public figures started to join the app.

On Feb. 1, Elon Musk, CEO of Tesla, and Vladimir Tenev, co-founder of Robinhood, a U.S.-based stock trading app, had a conversation in a chat room. About three days later, Mark Zuckerberg, founder of Facebook, also appeared to give a casual talk about the future of virtual reality and augmented reality.

Clubhouse rapidly garnered new users since then, with a total of 1.1 million downloads made last week, according to mobile app market researcher Sensor Tower. As of now, it has some two million users globally.

Over the last week, Clubhouse has shot up to No. 1 on the most-downloaded free apps list on Apple's App Store in Korea.

British media outlet The Guardian reported on Feb. 5 that Clubhouse is now valued at $1 billion and is considered a Unicorn start-up just like Airbnb and Uber.

Korea's ongoing struggle with a fear of missing out, or FOMO, has stimulated people's interest in the app. As people are only allowed to access the app when they have an invitation, people worry that they might be the only ones not on the trendy social network.


“I think the major reason behind the Clubhouse boom is the FOMO epidemic,” Yu said. “Unlike Instagram, Facebook and Twitter, which people use by checking other people’s posts, communication on Clubhouse is only available by entering a chat room and spending time there. It’s very time-consuming, so I think people are easily attracted by it and some might be addicted to it.” 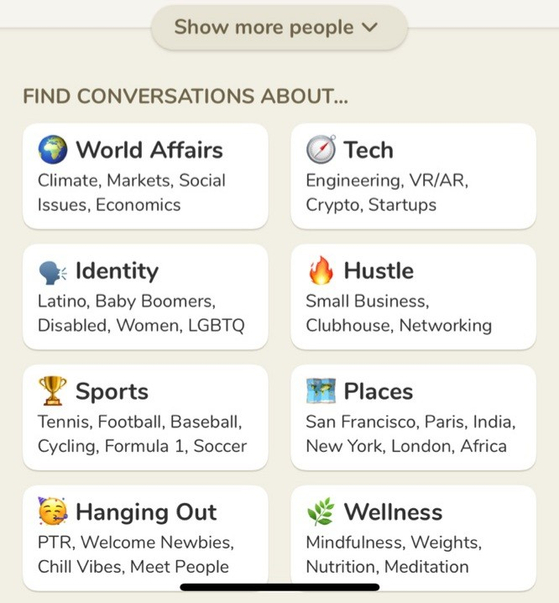 Clubhouse allows users to freely start and join a chat room based on their own interests and preferences. [SCREEN CAPTURE]


The freedom the app gives users to create rooms based on different topics and interests has helped boost popularity.


“Recently I was in a ‘voice imitation’ room where people share how they can mimic others’ voices, and rapper Swings suddenly entered the room and imitated his own voice,” said Lee Jeong-hwan, a 29-year-old user of Clubhouse. “I think the app is intended to satisfy people who have a craving for communicating with others in the era of coronavirus.”

Clubhouse is currently available only on iOS. The company said it is developing an Android version.

Beware of the mask, Musk

Creativity and innovation is key