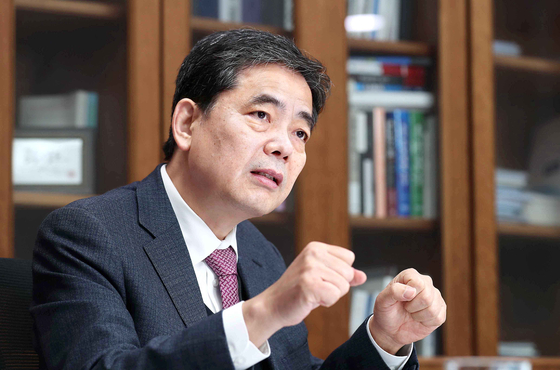 
A two-term lawmaker of the main opposition People Power Party (PPP) said Sunday he will sue President Moon Jae-in this week to compensate for damages he suffered from the state authorities' investigations into unsubstantiated allegations against him.

"Moon abused his power and ordered the authorities to investigate me," Rep. Kwak Sang-do of the PPP said in an interview with the JoongAng Ilbo on Sunday.

Kwak, a prosecutor-turned-politician, served as the senior presidential secretary for civil affairs for Moon's predecessor, Park Geun-hye, in 2013.

In March 2019, Moon ordered police and prosecutors to get to the bottom of three major sex scandals, including the 2013 case involving former Vice Justice Minister Kim Hak-eui. Kim had served only six days in the post during the Park administration before he resigned amid allegations that he had attended a party thrown by a contractor who hired women to have sex with high-profile figures in order to gain business favors. 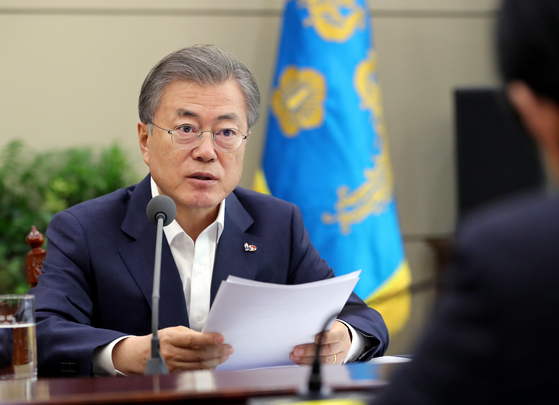 In this file photo, President Moon Jae-in receives a briefing from Justice Minister Park Sang-ki and Interior and Safety Minister Kim Boo-kyum about a series of sex, drug and police protection scandals surrounding the country's celebrities and top politicians and orders thorough investigations. One of the scandals involved former Vice Minister of Justice Kim Hak-eui of the previous administration. [YONHAP]


Kwak was suspected of having stopped the police from investigating the Kim scandal in 2013 while he was working in the Park Blue House. Following the reinvestigation sanctioned by Moon in 2019, the prosecution cleared Kwak that June.

Kwak told the JoongAng Ilbo that the reinvestigation was ordered without proper grounds. He said the Moon government put a bull's-eye on him because he attacked the presidential family over corruption allegations.

"There are no legal grounds that allow the president to order an investigation for a specific case," Kwak said. "He ignored the legitimate criminal process and forced public servants to work on something that is not their responsibility."

Kwak said he will file a civil case against Moon this week for at least 100 million won ($91,000). This will be an unprecedented lawsuit by an opposition lawmaker against an incumbent president.

"I will also file similar civil suits against the people who were involved in the probe against me, such as then-Senior Presidential Secretary for Civil Affairs Cho Kuk and then-Justice Minister Park Sang-ki," Kwak said. "I will also sue the members of the Justice Ministry's factfinding committee and prosecutor Lee Gyu-won, who advised the probe, for defamation."

"My honor was seriously damaged by media articles criticizing me after the prosecution's factfinding committee recommended a reinvestigation," Kwak said. "It is particularly unacceptable that Moon told the police and the prosecution to consider it their 'fate' to be involved in the probe."

Kwak said Moon's order was too personal, saying "It was not an act of running the government. It was just an act to press for revenge against me."

Kwak has been a vocal critic of Moon's children, and he said his criticisms are what invited the probe.

He said he has decided to sue Moon in a civil court because his criminal complaint against Moon filed to the prosecution in 2019 has shown no progress.

There is little possibility that the prosecution will actually consider Kwak's criminal complaint against Moon. According to the Constitution, the president is immune from a criminal indictment when he is in office, unless he commits treason.

Kwak has been at war with Moon's daughter and son ever since Moon took office in May 2017. Kwak raised suspicions over the presidential daughter's relocation to a foreign country and her husband's employment, arguing that the relocation to Southeast Asia was for the education of the president's grandson. While admitting that they had moved overseas, the Blue House refused to offer further details and criticized Kwak for an invasion of privacy.

Over the past few weeks, Kwak has been attacking Moon Joon-yong, the president's son who works as an artist. Kwak raised suspicions that the 38-year-old enjoyed special treatment when receiving a relief grant for artists suffering due to Covid-19.

Earlier this month, Kwak raised an allegation that the president's son received 14 million won from the Seoul Foundation of Arts and Culture's relief fund last year despite his lack of qualification.

The foundation denied the accusation and Moon Joon-yong also criticized Kwak for abusing his power as a lawmaker to attack him. In a Facebook posting, the artist said Kwak is repeating groundless accusations against him, obstructing the business of the foundation and undermining its fairness.

Sins of the past