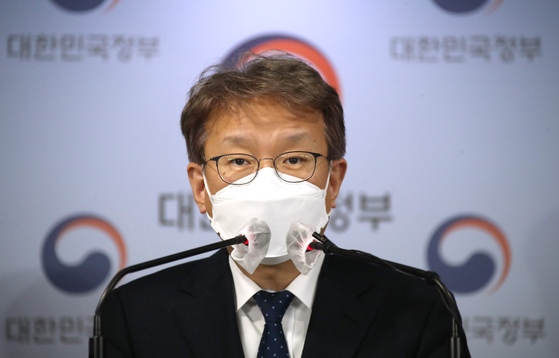 Kwon Chil-seung, Minister of SMEs and Startups, during a press briefing at the government complex in Seoul on Tuesday. [YONHAP]

To give a boost to start-ups, the government favors allowing companies to have more than one class of shares, with some shares having more votes than others.

The decision came on the heels of Coupang’s announcement of a New York Stock Exchange listing with a dual-class share structure.

Under the Commercial Act, each share of a Korean company can only have one vote.

Although Kwon said the government is looking into adopting dual-class voting rights, he said that Coupang’s choice of New York over Seoul isn’t the reason.

The minister stressed that Coupang is an American company that is going public in the U.S. market.

The case of Coupang “is different from local companies that received investment from Korea and grow and expanded overseas,” Kwon said.

“Coupang in conducting business in Korea grew into a unicorn company,” Kwon said. The offering “shows how much our venture ecosystem has grown.”

The minister stressed the importance in expanding Korea’s start-up industry, which has played a pivotal role in employment during the Covid-19 pandemic.

“While our economy struggled from the Covid-19 crisis last year, the innovative venture and start-up industry has played a solid role, contributing to significantly increasing jobs,” Kwon said.

According to the SMEs and Startups Ministry, local start-ups had 724,138 employees as of end of last year. That’s 7.9 percent more than a year ago.

“By adopting dual-class voting rights for unlisted venture companies and through venture financial systems equivalent to those in the Silicon Valley, [the government] will work on creating more jobs in the venture and start-up [industry],” Kwon said.