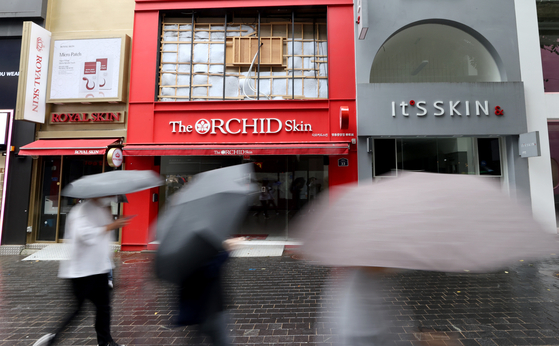 Stores closed along the street of once crowded shopping district Myeong-dong in Seoul on Friday. The government on Friday announced that they will be compensating small business owners up to 100 million won if their businesses ere affected by the Covid-19 social distancing regulation. Even shop owners that are no longer in business can still apply for the government's compensation program for small shop owners if they were still opened between July and September this year. [YONHAP]

The government is pledging to compensate small businesses for up to 80 percent of the losses they suffered due to social distancing regulations.

The ceiling is set at 100 million won and minimum compensation at 100,000 won. The most likely beneficiaries are small businesses like neighborhood restaurants and coffee shops

The Ministry of SMEs and Startups said Friday it will start accepting applications on Oct. 27.

Compensation will be offered for losses between July 7 and Sept. 30 this year. Companies will have to prove a fall in daily average revenues from the same period in 2019.

Even businesses that have closed down will be able to apply.

Manufacturers are eligible if annual revenues are lower than 1.2 billion won.

Travel agencies, which were heavily affected, are not included.

Prime Minister Kim Boo-kyum said via Facebook Friday that the government will not ignore the difficulty that such businesses face, including in tourism.

“It is meaningful that we have created a compensation system for small shops that have followed social distancing regulations including limiting business hours,” said Kwon Chil-seung, Minister of SMEs and Startups.