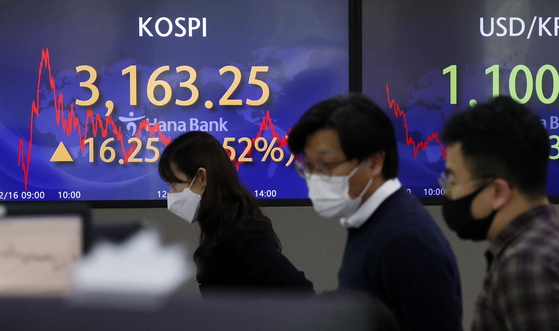 The final figure for the Kospi is displayed in a screen in a trading room in Hana Bank in Jung District, central Seoul, on Tuesday. [NEWS 1]


Korean stocks gained for a third consecutive session Tuesday, backed by signs of global economic rebound that increased foreigners' appetite for risky assets. The won rose against the dollar.

The Kospi briefly touched the 3,180-point mark in the morning session on robust foreign buying but lost some of its gains on increased profit-taking by institutions.

Most tech heavyweights performed well in Seoul, while bio and chemical shares declined.

The local currency closed at a monthly high at 1,100.1 won against the dollar, down 1.3 won from the previous session's close.

The yield on the three-year bond lost 1.3 basis points to close at 0.985 percent.