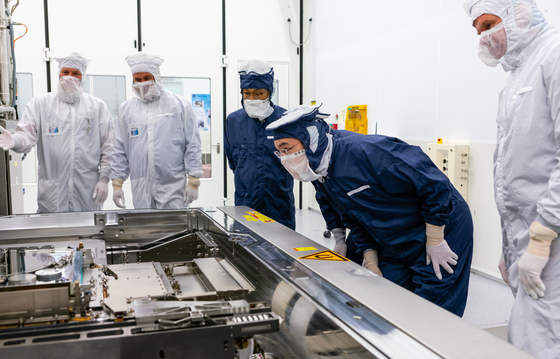 In a file photo from last year, Samsung Electronics Vice Chairman Lee Jae-yong looks at a manufacturing line at the headquarters of chip equipment maker ASML in the Netherlands. [NEWS 1]


A global chip shortage that started in the auto industry and spread to other businesses has driven up the shares of major chipmakers including Samsung Electronics, generating speculation that the Korean chipmaker might go into the auto chip business in a big way.

Samsung Electronics' stock price surged this week as the chip giant is expected to benefit from an upturn in chip prices triggered by a hike in demand for consumer electronics goods and a recent shortfall in supply.
Its shares closed 0.83 percent higher at 84,900 won ($77) on Tuesday after gaining 3.19 percent on Monday. SK hynix shares showed a similar trajectory, rising  0.38 percent to reach 132,500 won on Tuesday following a 4.76 percent rise the previous day. 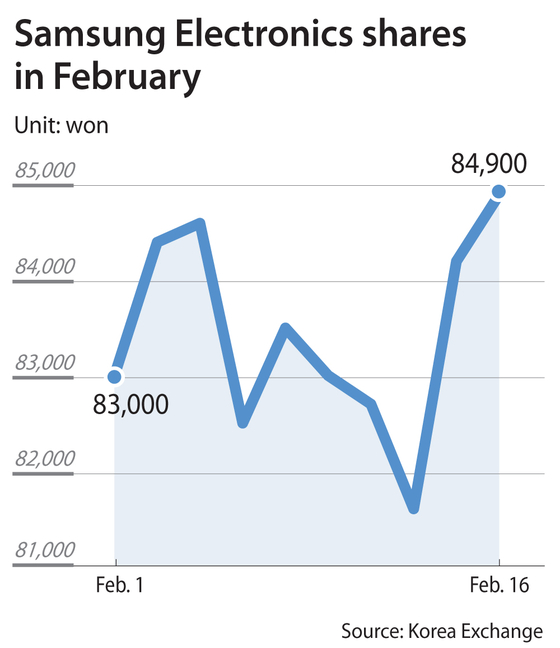 Analysts believe a chip scarcity will push up prices of chips across the board. A push by the U.S. government and EU to attract chip-making plants also highlighted the significance of having advanced chip manufacturing technology, which could boost the value of Samsung Electronics.

If that happens, semiconductor equipment makers like ASML, Applied Materials and Lam Research and foundries like TSMC, Samsung Electronics and DB HiTek will be major beneficiaries, according to Doh.

Foundries refer to companies that are contracted to fabricate chips designed by corporate clients. Foundries, and especially market leader TSMC, are operating at nearly full capacity to meet the surge in demand for chips for computers and other electronic products for work or school from home during the pandemic.

The U.S. president is expected to issue an executive order regarding the chip crunch in coming weeks as American carmakers including GM and Ford have resorted to cutting back production due to a disruption in their chip supply chains.

Some suspect Samsung Electronics may expand production of automotive chips, which currently account for only a fraction of Samsung’s sales.

A recent large-scale recruitment of experienced engineers for automotive chips as well as memory products and the foundry business fueled the rumors.

A spokesperson for Samsung Electronics said the hiring was connected with the “strategic importance of auto chips,” although it denied any link with the global shortages.

Samsung currently produce processors to power in-vehicle infotainment systems and sells them to Audi and Tesla.

“To manufacture the auto chips in short supply, Samsung would be required to establish an entirely different facility since the wafer size of car chips is different from computer chips,” said Ahn Ki-hyun, a director of the Korea Semiconductor Industry Association.
“The decision is not something that can be made easily, and not just because auto chips are now in demand,” he said.

Such a big decision would be tough for Samsung considering its leader, Samsung Electronics Vice Chairman Lee Jae-yong, is in jail for bribing former president Park Geun-hye and her friend.

Regular meetings with Lee in prison will only be possible for Samsung executives starting Wednesday, after he finishes a self-quarantine period.

The complexity of making car chips prompted others to assume that Samsung might be interested in acquiring a specialized chipmaker such as NXP or Infineon.

“Investment in or purchase of an auto chip maker is an easier option than building up all the infrastructure,” said a source in the semiconductor industry.

Samsung Electronics publicly acknowledged earlier this year that it is on the hunt for major takeover targets over the next three years, although it didn’t go into specifics.