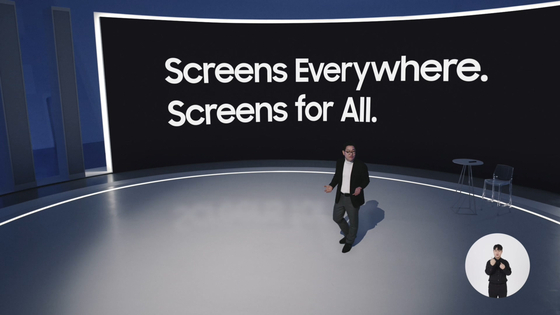 Han Jong-hee, head of the visual display business at Samsung Electronics, delivers a speech at the First Look event on Jan. 6 this year. [YONHAP]


Samsung Electronics may have trouble manufacturing TVs because of the global shortfall of semiconductors.

“If the trend continues, we might run into a situation where we can’t produce TVs because of the chip shortage,” said Han Jong-hee, president of the company’s visual display division.

He said the company has enough of the components to keep making TVs this year, but the shortages could become serious next year.

“The industry is facing a severe shortage of chips across the board,” he told reporters during the World IT Show held at Coex in southern Seoul, on Wednesday.

When asked why he went to Taiwan earlier this month, he said that the business trip was intended to brace for next year. He reportedly met executives at Taiwanese chipmakers MediaTek and Novatek Microelectronics.

For TV makers, display drivers, which act as interfaces between microprocessors and LCDs, are of particular concern, since the scarcity started in the beginning of the year.

The president rejected the possibility that Samsung is interested in deploying LG Display’s organic light-emitting diode (OLED) panels, but was vague in his denial and did not totally dismiss the possibility.

The electronics maker is exploring the possibility of adopting Samsung Display’s OLED panel known as “QD-OLED.” The OLED screen contains a layer made of quantum dots to enhance color rendering.

Samsung Electronics “has recently received the sample QD OLED,” Han said, adding that the company is looking to it.

He went on to mention that the company may expand the capacity of its production lines for Micro LED TVs as demand for the televisions remains strong.