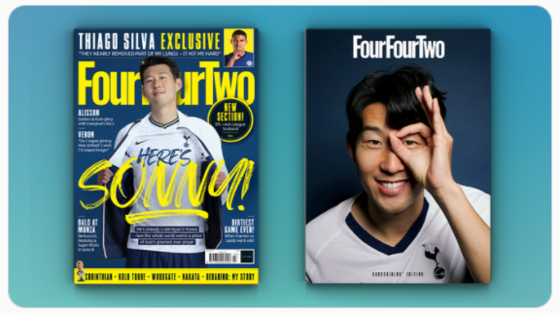 
Tottenham Hotspur star Son Heung-min is the focus of the March edition of footballing magazine FourFourTwo, with the front cover and a special feature dedicated to the Korean player.

Son is depicted on the front cover of the English-language magazine under the banner "Here's Sonny." A special feature inside titled "Empire of the Son" chronicles the Spurs striker's career so far and the rise of "Son-mania" around the world.

"He's already a demigod in Korea — now the whole world wants a piece of Asia's greatest ever player," the front cover of the magazine says.

Son isn't the only Korean footballer honored in the magazine, which also has a section titled "The Trailblazers" honoring the "torch-bearers for Asia's finest," the first Asian footballers to make it in Europe. Cha Bum-kun, also known as Tscha Bum, is included in this section, recognizing the footballing legend's career as the first Korean player to find huge success in Europe.

Spurs will be back in action on Thursday against Austrian side Wolfsberger AC in the Europa League, or at 2:55 a.m. on Friday morning in Korea.