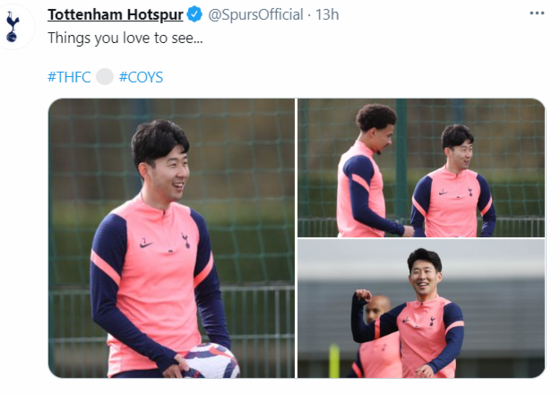 
Tottenham Hotspur forward Son Heung-min rejoined the club for training on Thursday, suggesting the Korean star has recovered from injury and may rejoin the club for its Premier League match against Newcastle United on Sunday.

Son has missed all club and international fixtures since he suffered a hamstring injury during Spurs' North London derby against Arsenal on March 14, pulling up while on the run in the 18th minute holding his leg. Tottenham quickly sent their medical team onto the pitch and after a brief attempt to walk it off, Son was taken off and headed straight down the tunnel.

Since then, Son has missed two club fixtures — Spurs crashed out of the Europa League with a humiliating 3-0 loss to Dinamo Zagreb on March 18 and picked up a 2-0 victory in the Premier League against Aston Villa on March 21.

He was also absent when the Korean national team, which Son normally captains, struggled to a crushing 3-0 loss against Japan on March 25.

With the international break over and three weeks of rest under his belt, Son appears to be ready to play again. Having scored 17 goals with 14 assists in 39 games across all competitions so far this season, Son's return to the Spurs lineup could be a big boost for the club and a blow for their opponents.

Spurs are currently ranked sixth in the Premier League, well ahead of Newcastle at 17th. If Son is able to return to the starting lineup as the club heads to St James' Park in Newcastle on Sunday, Spurs ought to have a relatively easy fixture on their hands.

The club has yet to confirm if Son is fit enough to play, although it did release images of him training with the team through its official social media channels on Thursday.