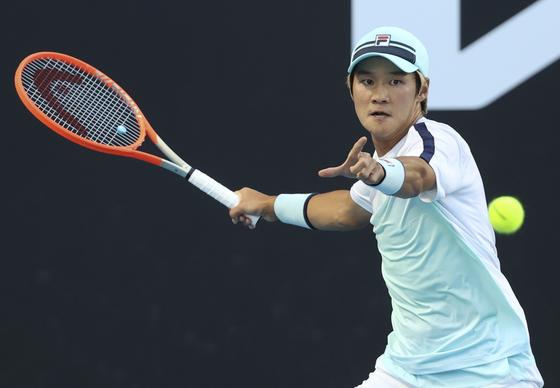 Kwon Soon-woo faces Australia's Thanasi Kokkinakis during the first round match of the Australian Open in Melbourne, Australia on Feb. 9. [AP/YONHAP]


Korean tennis player Kwon Soon-woo earned a spot in the Round of 16 at the ATP Challenger Biella Indoor 2 in Biella, Italy on Monday.

Kwon, who participated in the tournament after failing to make it past the first round at the Australian Open, will now face either world No. 182 Roberto Marcora of Italy or world No. 139 Henri Laaksonen of Switzerland in the Round of 16.

Kwon is the third highest seed at the tournament, after world No. 94 Alejandro Davidovich Fokina of Spain and world No. 88 Sebastien Korda of the United States, meaning he is considered to have a very good chance of reaching the final stages of the contest.

Kwon has picked up one win in 2021 so far, beating Slovak tennis player Andrej Martin in the Round of 64 at the Great Ocean Road Open in three sets on Feb. 1. He went on to be knocked out of the tournament in the Round of 32, losing in straight sets to Miomir Kecmanovic of Serbia.