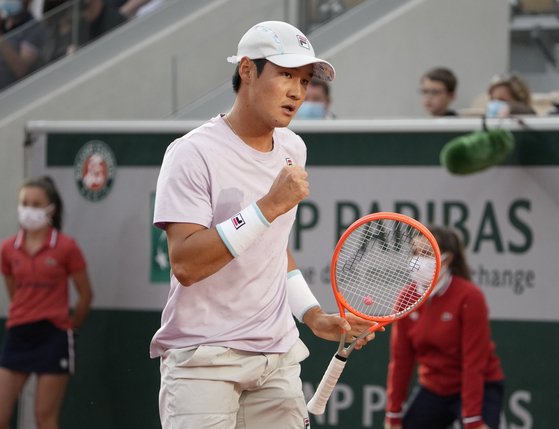 
Wednesday was a big day for Kwon Soon-woo. Not only did the 23-year-old beat world No. 49 Marton Fucsovics to reach the quarterfinals at the 2021 Eastbourne International in Eastbourne, England, he also found out that he will be the first tennis player in 13 years to represent Korea at the Olympics.

Kwon beat Fucsovics in a tight three sets — 7-6, 6-7, 6-3 — overcoming the higher-ranking Hungarian to move on to the quarterfinals.

As of press time, Kwon, currently ranked at No. 77, is due to face world No. 87 Ilya Ivashka in the quarterfinals on Thursday, to be played around 10 p.m. in Korea.

Wednesday's win came as a surprise for Kwon, who wasn't actually supposed to be playing. After losing his qualifier to Britain's Alastair Gray over the weekend, Kwon was knocked out of the Eastbourne International.

As well as his unexpected success at the Eastbourne International, the Korea Tennis Association also announced on Wednesday that Kwon has qualified for the 2020 Tokyo Olympics.

Korea competed in the tennis competition at the Games from its introduction as a medal event in 1988 to the 2008 Beijing Olympics, when Lee Hyung-taik went out in the first round. Korea failed to qualify at the 2012 London Olympics or 2016 Rio Games.

Kwon wasn't the only Korean tennis player in action in Britain this week. Women's ace Han Na-lae earned a spot in the first round of Wimbledon qualifiers, but lost her opening game in straight sets to Vitalia Diatchenko of Russia yesterday.