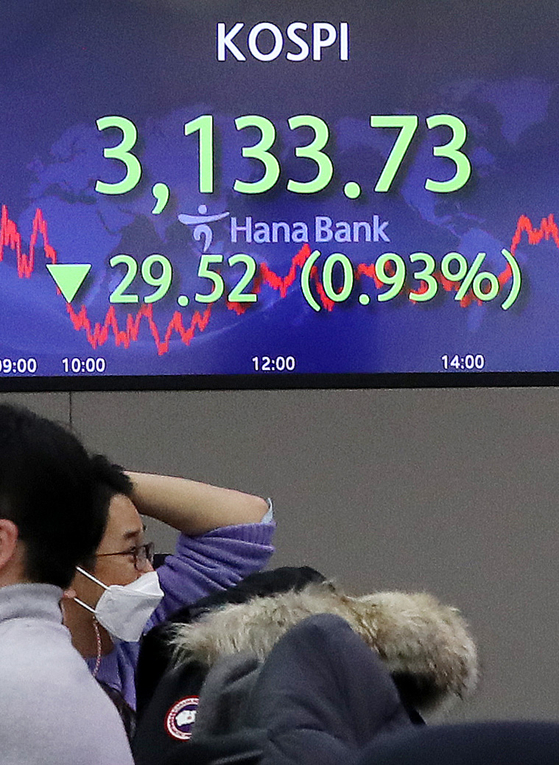 A screen in a dealing room in Hana Bank in Jung District, central Seoul, shows the final figure for the Kospi on Wednesday. [NEWS 1]

The Korean stock market ended its three-day winning streak Wednesday amid strong foreign and institutional selling that stemmed from concerns over a U.S. yield hike. The won fell against the dollar.

Trading volume was moderate at about 1.8 billion shares worth some 16.6 trillion won ($15 billion), with gainers outnumbering losers 422 to 417.

Most large caps fell after a lackluster start, with the Kospi bottoming out at 3,115.48 in the morning.

The Kospi's fall came along with losses by global peers, taking a cue from the U.S. benchmark 10-year Treasuries that plunged to about 1.3 percent after hitting the highest in 12 months, analysts said. The U.S. yield hike decreased investors' appetite for risk assets globally, they said.

"The local stock market was driven down (from the start) by foreign selling of futures and was affected by the rising U.S. bond yields that increased inflation worries," Kiwoom Securities analyst Seo Sang-young said.

The local currency closed at 1,107.5 won per dollar, up 7.4 won from the previous session's close.