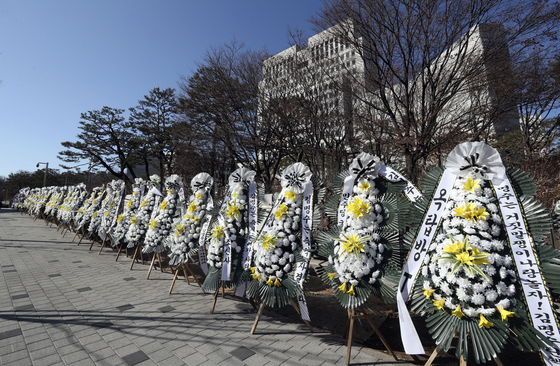 Wreaths are placed in front of the Supreme Court last week as part of protests against Chief Justice Kim Myeong-su after he was accused of yielding to political pressure. [KIM SEONG-RYONG]

The phrase “lame duck” originated in the 18th century at the London Stock Exchange. It referred to a stockbroker who defaulted due to excessive debt. The term became widely used in politics in the United States. A lame duck in politics is mostly used to describe a president who has lost control of the Senate and is unable to work properly as their term ends.

In a broader sense, a lame duck refers to the phenomenon of power leakage, as the command of the president is not effective toward the end of their term. That’s a regular event every five years in Korea. Despite all the efforts to reduce the lame duck period, it is repeated without exception. The ruling Democratic Party (DP)’s efforts to change the party bylaws to field candidates for the April 7 mayoral by-elections also relate to the DP’s effort to reduce the lame duck period for President Moon Jae-in.

The lame duck seems to be gradually expanding its boundaries. Many non-elected public officials are concerned about their remaining terms. The most notable one is Supreme Court Chief Justice Kim Myeong-su. The chief justice’s dignity and authority fell after his lie was disclosed and a remark suspected to be a political deal led to accusations that he violated the separation of powers. In his inaugural speech, a senior prosecutor lamented, “It is devastating that the court has become a laughingstock after the public’s trust in the judiciary collapsed.”

Prosecutors are not much different. The leadership of the head of the Seoul Central District Prosecutors’ Office has already collapsed, and he is a potential criminal suspect. But the sitting power has grabbed him and lifted him up. If the power appoints Lee Seong-yun, the top prosecutor, as the next prosecutor general, he would reign over the prosecutors for two and half years despite all the controversies over his submission to power. I am doubtful if our prosecutors trained to deal with rebellion at the top of the law enforcement agency would really accept him, let alone obey him.

As the lame duck period extends, the damage to government organizations and people grows. It’s not rare that retribution caused by a lame duck sends a direct hit to his power. Within the boundaries of not violating the separation of powers, the ruling party and the administration need to reflect on themselves and their use of power.