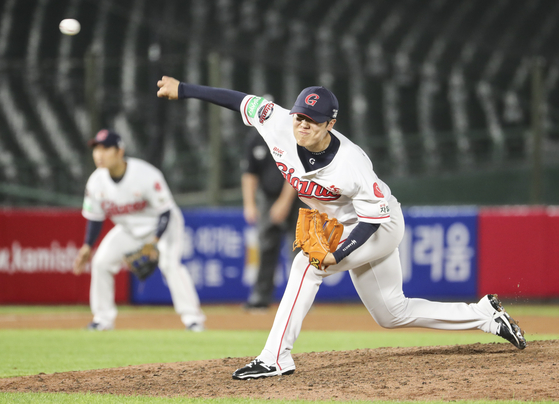 Lotte Giants' reliever Park Jin-hyung pitches at the top of the 10th inning against the Samsung Lions at Sajik Baseball Stadium on June 26, 2020. [YONHAP]

Joining the Giants in 2013, the right-handed closer earned a spot on the roster in his second year and has guarded Lotte's back door ever since. Last year his strikeouts per nine innings averaged 10.55, making him the most lethal pitcher on the team.

But the 2020 season was a struggle for Park. Injuries to his elbow and ankle saw him excluded from the entry and caused him to slump. He finished last season with one win, four losses, 17 holds and a 5.70 ERA in 53 matches.

Unlike in the MLB, where holds are an unofficial statistic, the KBO officially records and recognizes holds, and award the best pitcher in the category each year.

In order not to repeat last year’s mistake, Park headed to Lotte's Sajik Baseball Stadium during his four-day Lunar New Year holiday. He blamed last year's injury and slump on himself.

"Last year’s injury was not a physical problem," said Park. “I was lazy with exercise because I thought it would get worse if I made a change when I had a good rhythm.”

To maintain his condition this year, Park bulked up from 78 kilograms (172 pounds) to 85 kilograms through training and by improving eating habits.

In addition, Park is looking to make technological changes to his pitches. This year, he will focus more on his throws with the help of Lotte's power analytics team.

"Pitching Coach Lee Yong-hoon gave me a lot of advice,” said Park. “The key point is locating my pitches. Through cooperation with the data team, we are making changes."

Although 2020 season had many regrets, there were still some satisfying moments. Park picked the game against the KT Wiz on June 7 last year as his most memorable one.

Park pitched at the top of the eighth with the bases loaded and one out, taking out Mel Rojas Jr. and Yoo Han-joon with a short fly ball and a ground ball to shortstop to end the game.

"The good thing last year was that I blocked well when there were a lot of runners on,” said Park. "I was especially happy when I stopped [Koo] Seung-min from a bases-loaded jam."

This is also Park's strength. Park appeared in more games last year than he did full innings, as Lotte frequently waited until there were runners on-base to call in the strike-out champion.

Park’s goal for the upcoming 2021 season is clear: Break Oh Hyoun-Taek’s record of 25 holds and help the Giants win.