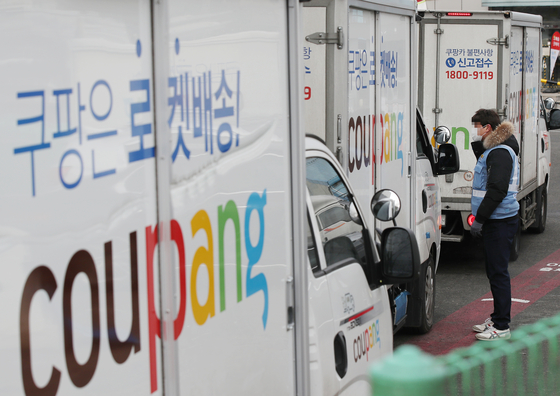 A Coupang worker talks with the company's courier in Seoul on Tuesday. Coupang said Thursday that it will distribute shares worth 2 million won ($1,800) to workers working as of March 5 as it prepares for listing on the New York Stock Exchange. [YONHAP]

Coupang founder Kim Bom-suk said during the company's first anniversary celebration, in 2011, that he planned to list the company on the Nasdaq within two years.

Almost a decade later Coupang announced it applied to be listed on the New York Stock Exchange (NYSE), not on Nasdaq or on the Korea Exchange.

It seems a long way to go for a bit of capital, leaving some to wonder if there isn’t more to it than the much discussed dual-class of shares, which Coupang said would be utilized in the offering to protect the interests of its founder.

To a certain degree, the answer is obvious. The listing entity, now Coupang LLC and soon to be Coupang Inc, is a Delaware corporation, so it makes sense for it to list in the United States. It owns Coupang Corp., the Korea-incorporated entity that operates the actual business.

SMEs and Startups Minister Kwon Chil-seung earlier in the week acknowledged this fact, saying that it is simply a matter of a U.S. company going public in the United States.

It may also be relevant that much of Coupang’s shareholding base in non-Korea.

Major shareholders include SoftBank’s Vision Fund, which reportedly owns some 37 percent in the company. The fund is also backed by Saudi Arabia's sovereign wealth fund, SoftBank, Apple and Qualcomm.

As Kim mentioned just a year after the start-up's foundation that it was aiming to be listed on the Nasdaq, it seems the company didn't consider listing in the Korean market in the first place, though it has been hoping to keep its identity as a Korean company.

In 2019, amid a trade dispute with Japan over political issues, Coupang said in a statement that it is a "proud Korean company that grew in the local market and operates 99 percent of its business here."

In its S-1 filing submitted to the U.S. Securities and Exchange Commission on Feb. 12, Coupang states that it is the third largest employer in Korea and is committed to investing in good jobs and economic opportunities for workers. It added its goal is to create a total of 50,000 new jobs in Korea by 2025, showing it will maintain strong investment in the Korean market even after listing abroad.

Industry experts say Coupang may simply be in the United States to up its market value by listing on a bigger exchange with abundant liquidity where major global companies are listed and to where major global institutional investors flock.

Han Kim, general partner of venture capital firm Altos Ventures, said in a Facebook post earlier in the week that major reason for companies to go public in the U.S. markets is to "meet smart institutional investors and attract investment from them" not just because the U.S. market allows dual-class shares.

Altos Ventures invested in Coupang in 2011 together with hedge fund Maverick Capital.

The dual-class system, which is currently not permitted in Korea, gives some shareholders more votes per shares than others. This allows minority shareholders to maintain control of a company even as more stock is issued. Coupang mentions in its S-1 that Class B shares, with 29 voting rights per share, can only be held by Kim.

"The most unexpected part was that Coupang aimed for NYSE, not Nasdaq," said Joo Young-hoon, an analyst from Eugene Investment & Securities in a report. "As Coupang has been posting losses for over a decade now, many had thought Nasdaq would be a good fit."

Joo said that it is likely to be "a way of expressing the company's confidence in its quickly improving financial balance sheet."

"Coupang may have thought facing head on with concerns about its financial instability is a way to maximize its valuation," said Park Eun-kyung, a research fellow at Samsung Securities.

To list on NYSE, companies need to meet tougher criteria compared to Nasdaq.

According to reports by the Wall Street Journal, Coupang is expected to be valued as much as $50 billion.

Local analysts say such a high valuation could not have been reached if Coupang was listed in the Korean market, though considering the company's recent earnings growth the market valuation can be justified.

Coupang's revenue grew by roughly 91 percent last year to $12 billion, with people rushing to e-commerce after the outbreak of Covid-19.

Losses have been falling over time. While the company recorded a $1.1 billion net losses in 2018, it posted a $474.9 million net loss last year.

Tough Korean regulations may also have driven it to the U.S. markets.

In the S-1, the company mentions that being tied to Korean regulations, including the Foreign Exchange Transaction Act, are potential risks.