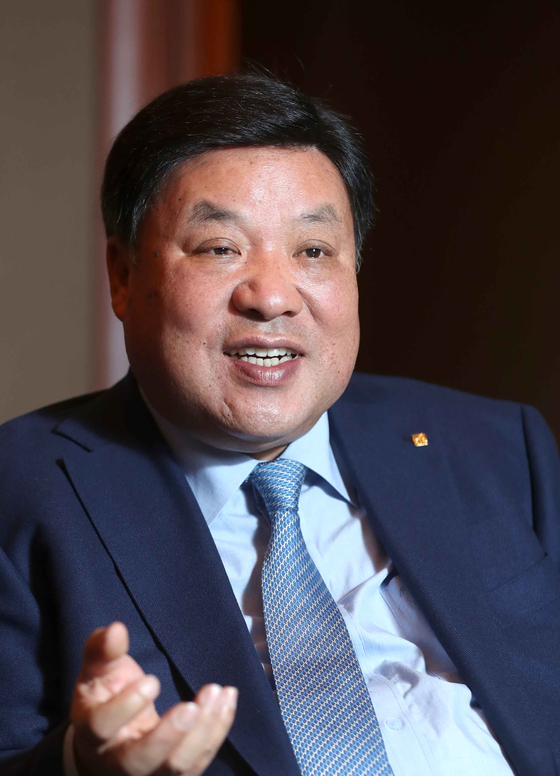 Celltrion will attempt to develop a Covid-19 vaccine if no other Korean company succeeds in doing so, according to Chairman Seo Jung-jin on Thursday.

"We use imported vaccines at the moment, but if Korea fails to develop a vaccine of our own, we're prepared to expand our realm into Covid-19 vaccines, setting aside the issue of [low] profitability," Seo said.

However, Seo made it clear that Celltrion are only willing to attempt development if Korea is left with no other option to source Covid-19 vaccines from domestic bio firms.

During an online press conference Thursday, the Celltrion founder raised concerns over coronavirus mutations found in Britain and South Africa. If the mutations keep evolving, existing vaccines may not be enough to put an end to the pandemic.

"There still remains many uncertainties and if the situation gets worse, there will need to be two and three-strain vaccines," he said. "If Korea falls behind in securing that supply, there won't be many options left but to take the matter into our own hands.

"Korea should be independent in regards to vaccine supply and while imported vaccines can bridge the gap, having our own is the only way to minimize damage to this country."

Originally famous for biosimilars, Celltrion is the only domestic bio firm to have completed development of a coronavirus treatment. Having received a conditional use approval on Feb. 5, Celltrion's regdanvimab, or CT-P59, was distributed to local hospitals as an official treatment on Wednesday. In Korea, it is distributed under the brand name Regkirona.

However, the company has faced concerns over the Covid-19 treatment even after its approval. One comment from experts during the approval process was that regdanvimab's efficacy on light-symptom patients was not statistically proven.

"Sixty percent of the 330 participants [in Phase 2 trials] showed symptoms of pneumonia while the other 40 percent did not — the latter showed the same results in the reduction rate of coronavirus in the body and in the effect of reducing the treatment period to two days," he said.

Celltrion has produced doses of the treatment for 100,000 people so far, and plans to manufacture an additional 400,000 by late March, Seo said. The maximum annual capacity is 3.2 million doses.

According to Seo, the company has confirmed that CT-P59 is effective in treating the British strain but is relatively weak in combatting the South African strain. Celltrion is developing another treatment candidate that could specifically work for the latter, with Phase 2 clinical trials aimed to be completed in South Africa within the next six months.

As required by the conditional use approval, Celltrion is currently conducting Phase 3 clinical trials, with around 150 people injected for tests so far. Results are likely to come in the next five months, Seo said.