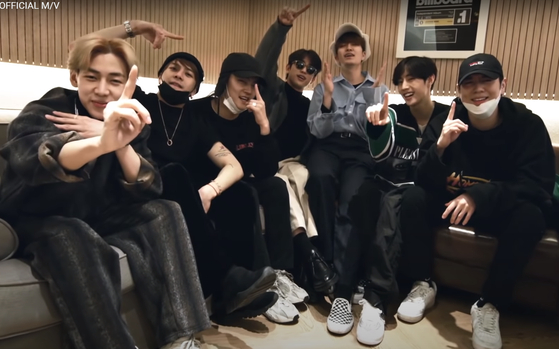 Seven members of GOT7 in the music video of the new song ″Encore″ released on Saturday. [YOUTUBE CAPTURE]


All the seven members of the boy band GOT7 came together again to release a new song “Encore” for their fans Saturday, after ending their contract with JYP Entertainment last month. The band members have found or are looking for their new bases at different agencies.

Warner Music Korea announced the release of “Encore”, while explaining that the song contains GOT7’s message that they want to continue to sing together for the band’s fans. It suggests the band members could continue joint projects for fans, although the band is considered to be virtually disbanded now that its contract with JYP has expired.

Member Yugyeom on Friday confirmed that he joined the hip-hop label AOMG led by rapper and singer-songwriter Jay Park. Jinyoung, who is also active as an actor, recently signed a contract with BH Entertainment. Jackson, who has his own label Team Wang, signed via that label with Sublime Artist Agency.

On Jan. 19, GOT7 members posted a handwritten letter to their fan club Ahgase. Each member wrote several sentences, saying how sorry they were to be parting ways. They wrote that, though they are going their separate ways, “All of us want to continue making music for Ahgase, share it together, and continue spending time together in the future.”