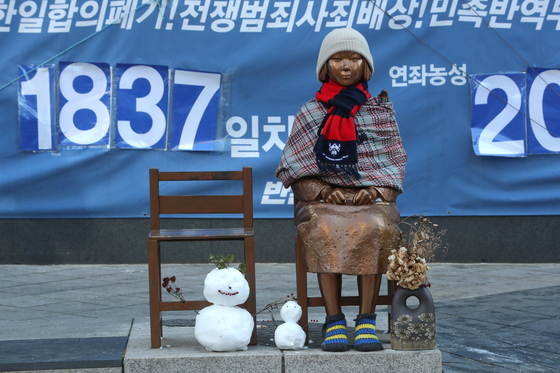 
A group of international historians Thursday issued a rebuttal to a paper that argues wartime Korean sex slaves were voluntarily contracted prostitutes.

In an article in the March 1 edition of the Asia-Pacific Journal, professors Amy Stanley of Northwestern University, Hannah Shepherd of Cambridge University, Sayaka Chatani of Harvard University, David Ambaras of North Carolina State University and Chelsea Szendi Schieder of Aoyama Gakuin University urged the International Review of Law and Economics not to print the paper, which was written by John Mark Ramseyer, a Harvard Law School professor.

Ramseyer’s paper, titled “Contracting for sex in the Pacific War,” has been available online since Dec. 1, but the academic journal told the Harvard Crimson on Feb. 12 that it will temporarily delay the print publication of Ramseyer’s paper so that an expression of concern and other comments and replies to the article can be printed in the same issue.

“As historians, we appreciate that scholars engage in different interpretations of the past, and we believe that well-grounded historical research, however unpopular, potentially offensive, or politically inconvenient, merits respect and thoughtful discussion,” the scholars wrote in the introduction to their joint article. “However, we contend that this article does not fall in this category. Its inaccuracies are more than superficial errors; they completely undermine the article’s claims. Indeed, if the sources were portrayed accurately, the argument would collapse.

“For this reason, we believe that the article should be retracted.”

In his paper, Ramseyer claimed that sex slaves of the imperial Japanese military, euphemistically called “comfort women,” were consenting prostitutes, claiming that contracts were signed by the women and the brothel keepers. Ramseyer cited witness testimony from comfort women survivors in support of his claims.

In the rebuttal, the authors argue that Ramseyer fails to provide examples of contracts for Japanese, Korean, or any other women, whether signed contracts or templates, for work in licensed brothels or at any other locations.

Regarding this lack of supporting documentation, the writers cite Harvard professors Andrew Gordon and Carter Eckert, who wrote in a separate letter to the journal, “Any reasonable standard of academy integrity would require that Ramseyer state in his article that he does not have access to actual contracts or sample contracts concluded with Korean women in Korea.”

The historians also say that Ramseyer mischaracterized testimonies of comfort women survivors by omitting sections where they recount being trafficked without understanding what they would be forced to do – and in some cases, using unpublished online translations of excerpts from existing memoirs which have been published in both Japanese and Korean.

In the case of Korean comfort woman Mun Ok-ju, the professors note that Ramseyer cited her testimony from an online website of 39 blogposts, instead of referring to her published memoir, available in both Korean and Japanese. They also note that he omitted the first instance where she was trafficked as a sex slave to Manchuria in 1940, choosing instead to only refer to her experiences in Yangon, Myanmar.

“In neither account is there evidence that Mun was aware of what the work would entail,” the authors write regarding Mun’s testimony about being trafficked first to Manchuria and later Myanmar. “A responsible use of this testimony would not only provide a correct, full, and verifiable citation to a published source, it would also mention both of Mun’s experiences as a comfort woman.”

News of the scheduled printing of Ramseyer’s paper was met with petitions and statements from students of Korean heritage at Harvard, who denounced the paper for what they argued were inaccuracies. At a webinar hosted by Harvard students, former comfort woman survivor Lee Yong-soo, who recently urged the Korean government to take Japan to the International Court of Justice over the issue, urged participants to “just ignore” Ramseyer.