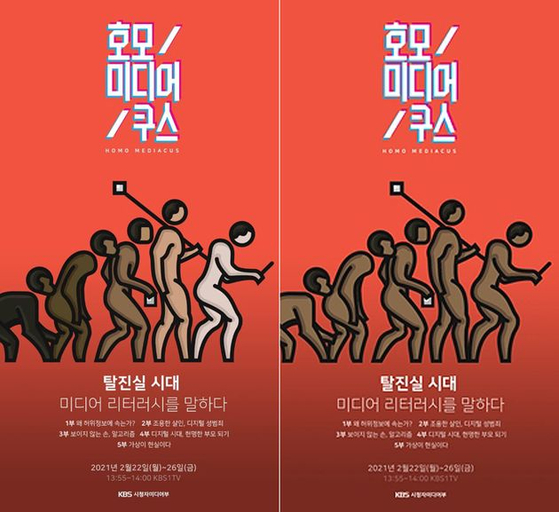 The poster of KBS's new TV documentary ″Homo Mediacus″ criticized for being racist, left, and the modified version, right. [KBS]


The public broadcaster KBS modified a poster for its new TV documentary series “Homo Mediacus,” the first part of which aired on Monday, after the initial poster was criticized by the public for being racist.

The documentary deals with hot issues of the digital media era such as fake news, digital sex crimes and artificial intelligence. The initial poster for the program features an image of human evolution in step with the changes in the media environment, based on the well-known illustration of “The Road to Homo Sapiens,” but as the humans evolve their skin tone becomes lighter.

After the initial poster was released on Thursday, it faced public criticism on social media. “Have humans evolved to be whiter?” wrote Park Sang-hyun, media critic and media director of C.O.D.E., the Korean branch of Creative Commons, on his Facebook account. “The designer might have made this [poster] without any intention, but the poster must have gone through a confirmation and approval process. Then, someone should have found it problematic. Nobody did, showing how people are used to racist ways of thinking about skin color.”

As the public criticism spread, KBS, on Friday, released a modified poster that depicts all the human figures with the same color skin tone, while explaining, “We modified the poster because there were opinions that the former design could be misleading.” However, the broadcaster did not give any further explanation or apology.

Meanwhile, some art lovers noted the poster’s style of depicting human figures in simplified forms was reminiscent of the style of famous British artist Julian Opie. Asked about the similarities, KBS public relation team explained the poster style was inspired by Olympic pictograms and Opie.