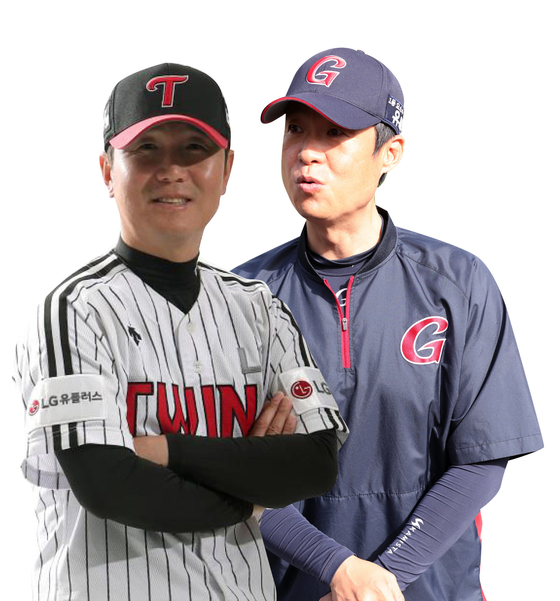 
With the KBO season set to kick off in just over a month, college best friends Ryu Ji-hyun and Her Mun-hoe are looking forward to upping the ante in their friendly rivalry this season.

"We knew each other even before joining [the Twins]," said Her. "We played in the Korea-US college baseball championships together in June 1992."

Ryu and Her, college juniors at the time, and Kiwoom Heroes' manager Hong Won-ki, then a freshman, flew to the United States to participate in the championships. The three also attended the Buffalo 1993 Summer Universiade the following year and took home silver medals.

The college friendship continued after they became professional players — Ryu even drove the car at Her's wedding.

"Ryu offered to help with my marriage," said Her. "I didn't have a car at the time, so [Ryu] drove me to the airport and picked up my wedding photo."

After graduating from Hanyang University in Seoul, Ryu joined LG as a first round draft pick. Her, who graduated from Kyungsung University in Busan, was chosen by the Haitai Tigers, now the Kia Tigers, in the first round of the second draft, then was traded to LG in a 4-2 trade.

By 2018, Her and Ryu had both become senior coaches for Kiwoom and LG. After the 2019 season, Her moved to Lotte and took the helm, while Ryu stayed at LG for his whole career and was appointed as the 13th manager of the Seoul club last year.

"The person I'm closest to is surely Her. He was the first one to congratulate me when I became a manager," said Ryu.

Despite managing clubs at different ends of the country, the duo's friendship has never wavered.

"Both of us are now in the position of leading a team," Ryu said. "It's a pleasant thing."

Although the two avoid talking shop during the season, they still discuss baseball from time to time.

"We sometimes talk on the phone during the off-season," Her said. "Recently, we discussed spring training."

Since Ryu took over as manager at LG, games between LG and Lotte always get a lot of attention. This year, the two friends will face off twice before the exhibition games even begin.

Two practice games between the clubs are scheduled on March 5 and 7 at Lotte's Sajik Stadium. Games between the two are referred to as "El Lotlasico," a combination of "El Clasico," the famous derby between La Liga football clubs Real Madrid and Barcelona, and the names Lotte and LG. Whenever El Lotlasico comes around, Ryu and Her leave their friendship outside the stadium.

"Friendship is friendship, but a game is a game," said Ryu.

"[NC Dinos] manager Lee Dong-wook is my rival, but in private we get along well," said Her. "I am obviously close to Ryu, but during the match, there may be bad-mannered scenes from both of us. That doesn't mean we won't get along well after the game."

This year the two are hoping to up the stakes. Despite being two of the original six KBO clubs, LG and Lotte have only met in the postseason once, in 1995. For the upcoming season, Ryu's goal is to reach the postseason and Her's is to "finish three steps higher than last year in fourth place."

If both managers get what they want, the two clubs could face off in the playoffs for the first time in 26 years.