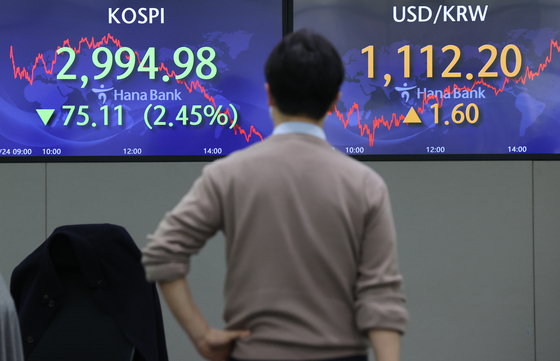 A screen at Hana Bank's trading room in central Seoul shows the Kospi closing at 2,994.98 points on Wednesday, down 75.11 points, or 2.45 percent from the previous trading day. [YONHAP]

Stocks tumbled by more than 2 percent to dip below the 3,000-point threshold Wednesday on massive foreign selling, largely due to concerns over a U.S. bond yield hike that drove the key stock index down for the past few sessions. The won fell against the dollar.

Trading volume was moderate at about 1.5 billion shares worth some 16.7 trillion won ($17.7 billion), with losers outnumbering gainers 835 to 57.

Foreign selling continued despite the Federal Reserve chairman's overnight comments that the Fed would continue its fiscal policy support.

Battery makers and automakers dropped after Hyundai Motor said it will replace batteries in over 25,000 Kona electric vehicles (EVs) due to defects in battery cells.

The local currency closed at 1,112.2 won per dollar, up 1.6 won from the previous session's close.