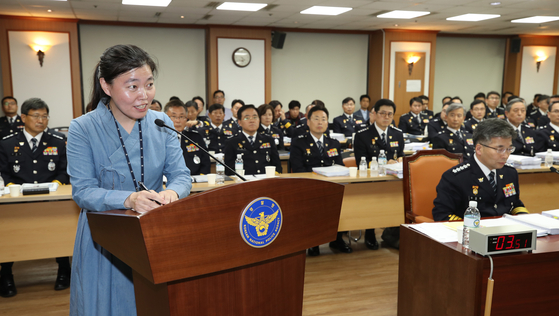 Lim Eun-jeong was unexpectedly included on a list of appointments by Justice Minister Park Beom-kye on Monday. Lim will retain her job as a Justice Ministry researcher of prosecutorial monitoring in addition to being granted authority to investigate cases as a member of the Seoul Central District Prosecutors’ Office, the ministry said.

Lim’s history as an outspoken critic of the state prosecution service’s insular culture has earned her a reputation that differs on either side of Korea's partisan divide.

Among progressives, she's seen as a fearless whistleblower who dared to defy her prosecutorial superiors and openly speak out about allegations of sexual abuse in the organization.

Conservatives disparage her for upsetting the agency’s hierarchy and flouting internal procedures, and have attacked her support for the Moon administration’s efforts to weaken prosecutorial authority.

Prosecutorial insiders say Lim’s further empowerment under Park is linked to her determination to revisit the case of former Prime Minister Han Myeong-sook, whose conviction and two-year imprisonment remains a cause celebre for liberals who claim she was the target of a politically motivated witch hunt.

Han served as Korea’s first female prime minister under President Roh Moo-hyun from 2006 to 2007, and once led the ruling Democratic Party during its wilderness years through the 2012 general election.

Shortly before she launched a bid to become Seoul mayor in 2010 local elections, which she eventually lost by a razor-thin margin, Han became the subject of an investigation of allegations she accepted 900 million won ($812,000) from a businessman as prime minister.

In 2015, Han was convicted for bribery and received a two-year jail sentence. She was released in 2017.

DP figures have insisted Han was a victim of a prosecutorial attempt to punish an influential opposition figure on flimsy grounds.

That argument gained further ground last year when investigative reporters uncovered the memoirs of the now-deceased businessman accused of giving her the bribe, Han Man-ho, which said prosecutors coerced him to deliver unfavorable testimony that led to Han Myeong-sook’s eventual conviction.

Lim, who has openly spoken out on various allegations of political meddling by prosecutors, examined allegations that prosecutors pressured Han Man-ho to commit perjury as a Justice Ministry researcher posted to the Supreme Prosecutors’ Office (SPO).

She complained, however, that her lack of investigative authority limited her ability to monitor prosecutorial activities, including the Han case. Her request to be appointed an investigative prosecutor was turned down repeatedly by Prosecutor General Yoon Seok-youl, who apparently found little cause to reopen such a politically sensitive case.

By granting her such powers, Minister Park has opened up an avenue for a reinvestigation of Han Myeong-sook’s case — just a month before the statute of limitations would expire for any misdeeds committed by the prosecutors in the case.

Should Lim reopen the case and discover evidence to prove Han was falsely charged, it would be politically explosive and give further justification to the Moon government’s prosecutorial reform drive.

The former prime minister herself, however, has shown little interest in seeking a retrial, having retired from the political scene since her release from prison. Legal analysts also note the case is unlikely to return to court unless sufficient new evidence is found.