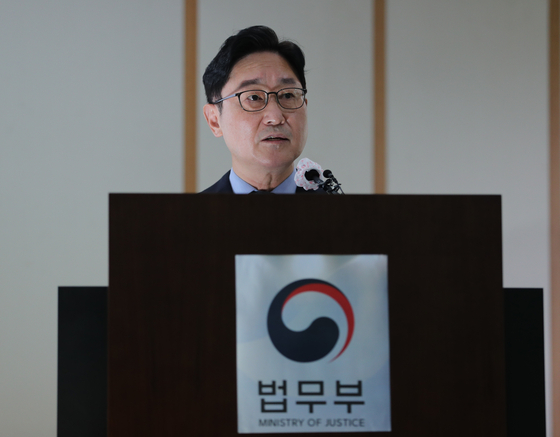 Park held a press conference Wednesday morning and announced the results of a four-month review of a 2010 investigation into allegations that former Prime Minister Han Myeong-sook took illegal political funds from a businessman.

The Ministry of Justice and the Supreme Prosecutors’ Office conducted a joint review of the allegation that prosecutors coerced the businessman Han Man-ho into changing a statement in 2010 and used it to back an indictment of the former prime minister.

Han, who served as prime minister from April 2006 through March 2007, was indicted in July 2010 on charges of accepting illegal political donations totaling 900 million won ($783,338) from a businessman. The Supreme Court finalized her conviction in 2015 and sentenced her to a two-year prison term. She was released in 2017. 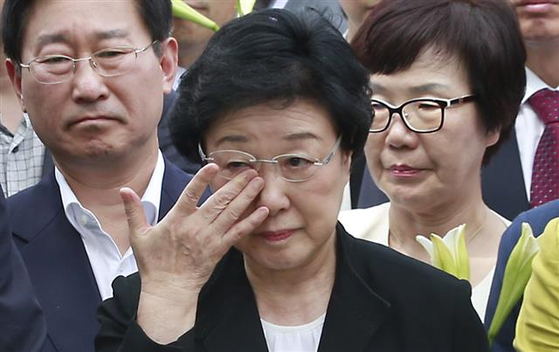 In this file photo, former Prime Minister Han Myeong-sook, center, sheds tears after meeting with her supporters on Aug. 24, 2015 after the Supreme Court upheld her conviction of illegal political fund receiving and a two-year prison term. Justice Minister Park Beom-kye, then a lawmaker, is seen on Han's left. [YONHAP]

The ruling Democratic Party (DP) demanded in May 2020 a probe into the case, claiming Han was found guilty based on fabricated testimony. The Supreme Prosecutors’ Office conducted two probes of the suspicion that prosecutors coerced the businessman to lie. It found no evidence to substantiate the allegation.

Park ordered yet another probe last March and announced the outcome Wednesday. The prosecutors, under the leadership of Yoon, tried to protect one another when they reviewed the 2010 probe, Park said. 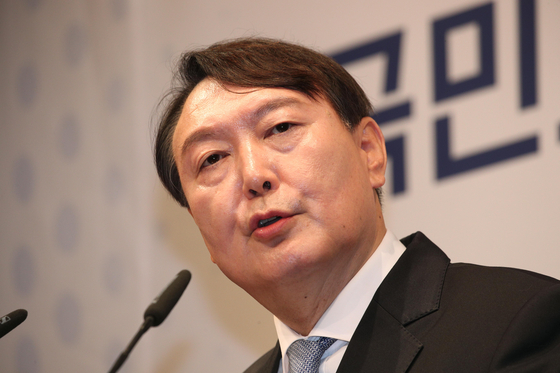 According to Park, Prosecutor Lim Eun-jeong, an internal affairs policy researcher in the Supreme Prosecutors’ Office, started a probe in September 2020 into the suspicion that the investigation team of the bribery scandal coerced the businessman to incriminate Han. Prosecutor General Yoon, however, issued a written order in March that Heo Jeong-su, head of the Internal Affairs Division III of the Supreme Prosecutors’ Office, would be in charge of the internal investigation.

At the time, the Supreme Prosecutors’ Office said the prosecutor general has power to assign a case to a prosecutor. It also said Lim was looking into the case on her own, and she was never formally assigned to conduct the probe.

Later in March, Yoon stepped down from the prosecutor general post, criticizing the Moon Jae-in administration’s attempt to weaken the state prosecution agency. He declared a presidential bid in June. He has been topping presidential polls for months.

Park attacked Yoon on Wednesday, saying that Yoon removed Lim from the internal affairs probe in order to protect some prosecutors who were his allies.

“The statute of limitation for the prosecutors’ alleged law-breaking was about to expire, and Lim was investigating the case with enthusiasm,” Park said. “But Yoon abruptly replaced her, obstructing the probe and prompting a suspicion that he was trying to protect ‘his family’ inside the prosecution.”

Park also challenged the Supreme Prosecutors’ Office’s conclusions in the earlier internal probes that there was no coercion of witnesses.

“The investigation team summoned the key witnesses about 100 times, repeatedly prepped their testimonies and offered them inappropriate benefits,” Park said. He, however, did not present hard evidence that the team coerced witnesses to speak against the former prime minister.

Park said the latest internal probe by the ministry and the prosecution was not meant to punish anyone. “I hope this serves as an opportunity for the prosecution to sever its ties to past practices and become a completely new prosecution in the future,” he said.

Park’s announcement will likely accelerate the Corruption Investigation Office for High-ranking Officials (CIO)’s probe into Yoon’s alleged abuse of power. The CIO has been looking into the allegation that Yoon abused his power as prosecutor general to obstruct the internal investigation.

The CIO received a criminal complaint from a liberal civic group and formally started a probe of Yoon in June. It is one of the first cases the CIO has decided to pursue since its launch in January.