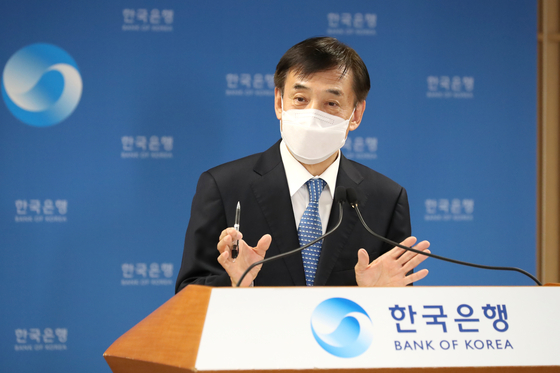 Bank of Korea Governor Lee Ju-yeol speaks at a press event held on Thursday, where he announced rates will be held steady at 0.5 percent. [BANK OF KOREA]


The Bank of Korea on Thursday projected a 3 percent economic growth rate for 2021, maintaining its estimate from November last year, as it held rates steady and dismissed inflation as a concern.

It said the domestic economy is recovering, with improved exports and facility investment, but consumption has remained sluggish as Covid-19 has extended social distancing.

“Vaccine inoculation and the fourth round of government relief funds are factors that raise economic growth, but there are also risks like the spread of the Covid-19 variant,” said Governor Lee Ju-yeol, in this year’s second rate-setting meeting.

The central bank made the projection based on the assumption that Covid-19 cases will gradually fall starting in the mid to second half of the year.

“As Covid-19 has extended, consumption projections in services has withered greatly, and it’s difficult for people engaged in the relevant industries to see improved income,” said Lee. “How strongly the economy will recover will determine when and how consumption will recover.”

The bank raised the unemployment rate projection to 4 percent from the previous 3.8 percent projection.

It announced Korea’s growth outlook next year at 2.5 percent.

On the same day, the monetary policy board of the bank kept the benchmark rate steady at 0.5 percent, but inched up the inflation rate projection by 0.3 percentage points to 1.3 percent due to increased prices of raw materials, agriculture products and oil.
“It’s true that there is upward inflationary pressure, but we need to watch whether it will continue,” Lee said, adding that the decision on the rate was unanimous. “One percent inflation is not concerning.”

Lee added exports have sustained their buoyancy led by the IT sector.

Exports rose 16.7 percent on year in the first 20 days of this month on strong shipments of chips and automobiles.

Lee told reporters that the bank will maintain easy monetary policy until the economy recovers stability.

“It’s not the right timing to discuss the normalization of monetary policy, like raising the key interest rate, at this point,” Lee added, but admitted the difference between short term and long term interest rates has widened, “which is commonly being seen in key countries.”