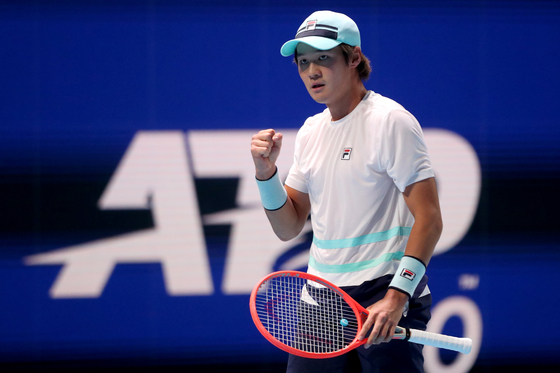 Kwon Soon-woo reacts in his men's singles second round match against Yasutaka Uchiyama of Japan on day four of the Singapore Tennis Open at the OCBC Arena in Singapore on Thursday. [GETTY IMAGES/SPORT SINGAPORE]


Korean tennis player Kwon Soon-woo earned a spot in the quarterfinals at the Singapore Tennis Open in Singapore on Thursday.

Kwon, who participated in the tournament just days after winning the ATP Challenger Biella Indoor 2 last week, will now face a much tougher challenge in world No. 44 Marin Cilic in the quarterfinals, scheduled for 7 p.m. tonight.

Kwon entered the Singapore Open as the eighth-seeded player in a competitive field that includes world No. 36 Adrian Mannarino and No. 39 John Millman of Australia. Millman has already been knocked out in the Round of 16.

If Kwon is able to make it past former U.S. Open winner Cilic, he will face a relatively easy path to the final, taking on either world No. 316 Matthew Ebden or world No. 115 Alexei Popyrin, both of Australia, in the semifinal. Despite his low ranking, Ebden beat Millman in a Round of 16 upset.

Kwon started 2021 as the world No. 97, picking up just one win at the Great Ocean Road Open on Feb. 1 before losing in the first round of the Australian Open.


His performance quickly turned around at the Biella Indoor 2. Kwon smashed through the tournament, losing only one set in the entire tournament — to Evgeny Donskoy of Russia in the semifinal. That tournament win saw him rise 16 places in the world ranking.


Kwon was having the best year of his career last year before the coronavirus pandemic interrupted the tennis season. He advanced to the second round at the U.S. Open, his best grand slam performance to date. As a result, Kwon also briefly shot up to No. 69 in the ATP World Ranking.