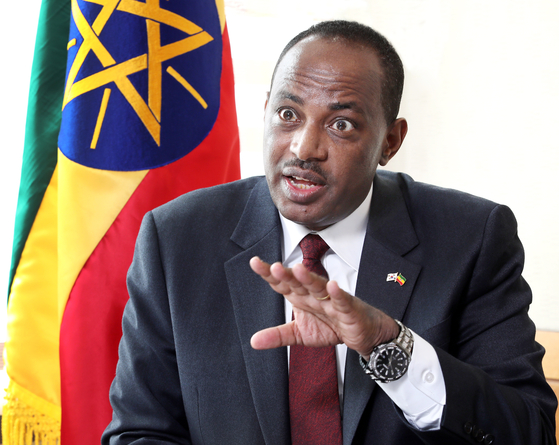 Shiferaw Shigutie Wolassa, ambassador of Ethiopia to Korea, speaks with the Korea JoongAng Daily at the Embassy of Ethiopia in Seoul on Feb. 22. [PARK SANG-MOON]


Though the March 1 Independence Movement in Korea and the Battle of Adwa in Ethiopia occurred more than two decades apart, the spirit of the people yearning for sovereignty and independence couldn’t have been more alike, according to Shiferaw Shigutie Wolassa, ambassador of Ethiopia to Korea.

“As Korea’s March 1 Independence Movement shares the date with the Battle of Adwa, I’d like to take this opportunity to congratulate the people of Korea and salute their forefathers and patriots who stood up for their independence through this great movement,” said Wolassa.

Ethiopia is celebrating this week of the Victory of Adwa, which commemorates the day Ethiopians came out victorious in their struggle against Italy’s attempt to colonize the nation on March 1, 1896.

Though the battle was “between a traditional African warrior and a modernized European colonial military,” according to Wolassa, the Ethiopians emerged victorious, resulting in the Treaty of Addis Ababa, in which Italy formally recognized Ethiopia as an independent nation.

The victory came to be a symbol to many people beyond Ethiopia’s borders.

“The battle of Adwa was the first time the African army defeated the European army. This makes the Victory of Adwa the victory of not just Ethiopians but the whole African continent and black people everywhere,” Wolassa said.

“Adwa turned Ethiopia into the symbol of freedom for black people. It showed that it was possible to imagine Africa without it being just a European colonial territorial extension.”

Given the Covid-19 situation throughout the world, the Adwa Victory Day is being celebrated within smaller-than-usual circles of communities, Wolassa said.

“[Usually,] thousands of people bedecked in lion or tiger mane collars, warriors’ headdresses and military fatigues celebrate the day marching in main squares of the country,” he said. “[Despite] this Covid-19 [pandemic], celebrations [have] started and will continue to be held with the observance of safe distance rules and other precautions.”

The Ethiopian communities in Korea will also be gathering virtually to hold celebrations.

Wolassa sat down with the Korea JoongAng Daily on Feb. 22 at the Ethiopian Embassy in Seoul to speak about the significance of the Victory of Adwa, its meaning to the Ethiopians and how the event that took place more than a century ago is still very much relevant to Ethiopia-Korea relations today. The following are edited excerpts of the interview.


Q. What were Ethiopia's circumstances that led to the Battle of Adwa in 1896?


A. Following the 1884-1885 Berlin conference among European colonial powers, Italy, which had a colonial presence at the Port of Aseb [southeast Eritrea] since 1882, started to expand its presence in the region. It slowly moved south to Ethiopia and reached the mountains of Adwa.

With the intention to colonize, the Italians eventually signed the “Treaty of Wuchale” with Emperor Menelik II in May 1889. The treaty was aimed to promote friendship and trade between the two countries. But the treaty was written in both Amharic and Italian, and it was found after the signing of the treaty that there were discrepancies in its content.

The Amharic version of Article 17 of the treaty was formed with a permissive clause stating the emperor of Ethiopia was granted a choice to conduct foreign relations through the emperor of Italy. The Italian version, on the other hand, was formed with a mandatory clause stating Ethiopia was obliged to conduct all foreign affairs thorough Italian authorities. King Menelik II of Ethiopia renounced the treaty when he became aware of the discrepancies in the two versions of the treaty. This was marked as the immediate triggering cause for the start of the war in 1896.


Q. An interesting aspect about the battle was that an empress devised the winning strategy for the conflict. Can you tell us more?


A. We had a great strategist in the empress. It was Empress Taytu Betul who presented the idea that the Ethiopian forces had better first attack and conquer the area that would cut off the water source to Italian forces. After Ethiopians took the area, the Italians were not able to recapture the place, and this proved critical to the Ethiopian victory in the battle.


Q. Ethiopia is a country home to 85 different languages today. How was the emperor at the time able to unify the people in fighting off the invaders?


A. Amharic is the overarching language used throughout the nation, but when it came to the issue of defending the nation, there was something more than just the common tongue that unified the nation: It was the spirit of the people. The Ethiopians were united in the cause to defend their nation’s sovereignty.

In this spirit, when Emperor Menelik II made a call for all Ethiopians in the cities to make an announcement that the country is under attack and that Ethiopians should unite and organize themselves to go to war, the people responded. After months of preparation, the Ethiopians made their way to Adwa, which is not a central location of the nation, after having armed themselves with traditional armory and whatever equipment that had on hand at the time.


Q. What was the significance of the Victory of Adwa for Ethiopia in particular and Africa in general?


A. After the victory, the two countries signed the Treaty of Addis Ababa which put among other things the unconditional acceptance of Ethiopian independence and sovereignty. Adwa became the source and symbol of patriotism for Ethiopians which had exerted successful resistance against a second attempt of colonial aggressions by the Italian colonizing power in the mid-1930s. And the victory continued to be a source of pride and identity for Ethiopians. It is a significant print in the Ethiopian identity and nationalism.

In Africa, well-known black freedom fighters and freedom movements were inspired by the African Victory of Adwa. The Caribbean freedom fighters Marcus Garvey, George Padmore and the well-known musician Bob Marley and their Pan-Africanist movement got inspiration from this successful resistance. The first Afro-Brazilian newspaper was also named “O Menelik,” publishing pride in black identity and African connection with prominent women writers in the 1910s.


Q. What is the legacy of the Victory of Adwa in Ethiopia’s foreign relations, including with Korea?


A. The Victory of Adwa is a result of the sacrifices paid by our forefathers for our beloved country’s sovereignty. Throughout our history, we Ethiopians had experienced the bitter test of aggressions by foreign powers. That made us respect and stand for the observance of the territorial integrity and sovereignty of all nations irrespective of size and wealth. This has always been the foundation of our relations with other countries.

When the Korean War of the 1950s had broken out and South Korea was invaded, Ethiopia, mindful of her own struggle against Italian aggression, agreed to dispatch its Imperial Bodyguard in response to the United Nations Security Council’s call with adherence to the principle collective security.


Q. How is the victory celebrated every year on March 2?


A. The Victory of Adwa is a public holiday which is celebrated every year on March 2 in public places throughout Ethiopia. In the capital Addis Ababa, it is celebrated at Menelik II Square with the presence of government officials, patriots, foreign diplomats and the general public. Thousands of people bedecked in lion and tiger mane collars, warriors’ headdresses and military fatigues celebrate the day marching in main squares of the country. Pubic art exhibitions, shows and music festivals are also held before and on the day of celebration of the victory day. These events will be held with observation of safe social distancing rules this year. Here in Seoul, our embassy is celebrating the day through online platforms. We will be exchanging ideas and plans on promoting the victory and creating awareness on our cultures.


Q. The events regarding Ethiopia's Tigray region has been concerning many. What is the Ethiopian government's latest position on the issue?


A. Various efforts have been taken by the Ethiopian government to address the region's complex security, humanitarian and social challenges, existing and emerging following the criminality of the rogue group. Currently humanitarian agencies have been provided unfettered access to aid in the region. Under the current phase access has been granted to international journalists from seven international media agencies. These are AFP, Al Jazeera, The New York Times, Financial Times, France 24, Reuters and BBC. Furthermore, the government of Ethiopia will continue bringing all perpetrators to justice following thorough investigations into alleged crimes in the region through our federal institutions. In this regard, the Ethiopian government welcomes international technical assistance to undertake the investigations as well as invites the potentials to collaborate on joint investigations. To conclude, I would like to reiterate my government's commitment of enabling a stable and peaceful region in which its citizens' needs are met and impunity does not prevail for perpetrators of crimes against humanity.


Q. In your past two years of ambassadorship in Korea, what are some Korean cultures and ideas that you have come to embrace more?


A. One of the values, out of many, that amazes me is that the people listen to the government and the government respects the people. This is a wonderful culture that needs to be cherished and I think this is one of the reasons why Korea’s democracy is working well. The Korean people that I have met during my tenure love their country, work very hard and are very professional and disciplined — they provide good lessons for outsiders looking to Korea.


Q. At the end of your tenure in Seoul, how do you wish Koreans would think of Ethiopia?


A. I want all Koreans to know that Ethiopia and Ethiopians are friends of Korea and Koreans. The Korean War of the 1950s where our forefathers fought and died together is printed in the memory of the peoples of both countries. Our relation is founded upon the sacrificed lives and injured bodies of both our forefathers. In addition, I want more Koreans to know that Ethiopia is a symbol of freedom and independence in Africa. Ethiopia is home to various cultural values, historical heritages and natural wonders, and our values on tolerance and harmony with various religions and ethnic backgrounds are something that I believe can be a strong message for the rest of the world.