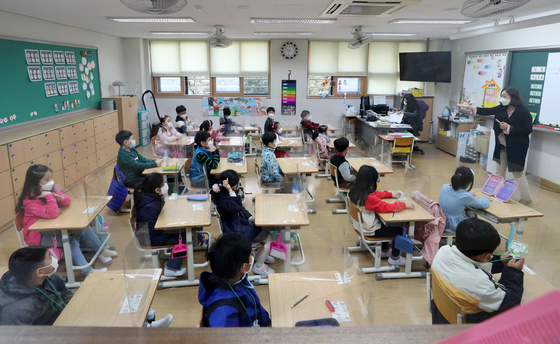 First graders at Maeyeoul Elementary School in Suwon, Gyeonggi, are finally back in classes Monday morning after the easing of social distancing guidelines. Starting this week, first graders can go to school every day. Other grades are generally capped at two-thirds capacity. [NEWS1]

First graders are now able to attend classes every day after months of school life disrupted by the coronavirus pandemic.

After social distancing guidelines were eased to the lowest Level 1 in a three-tier system, the Education Ministry announced on Oct. 11 that it would raise the cap on students attending physical classes to two-thirds capacity for all grades including kindergarten starting this week.

Under stricter guidelines in place since the spike of Covid-19 cases in late August, elementary and middle schools had been capped at one-third capacity, and high schools at two-thirds.

Education officials stressed the importance of in-person lessons for first graders because of their limited ability to learn through online classes and a need for them to get accustomed to school life.

Parents expressed both anxiety and relief at sending their first graders back to school. Teachers in Seoul had been generally opposed to the idea, worried about social distancing enforcement, in a recent poll by the Seoul education office.

In Gyeonggi, depending on the school, second graders can go to school at least four times a week.

The attendance cap is expected to be adhered to strictly in the more crowded Seoul metropolitan area, with efforts to stagger classes and spread out students by splitting up morning and afternoon sessions.

The Seoul Metropolitan Office of Education plans for all elementary students in grades two to six to attend physical classes between two to four times a week.

In some cities and provinces outside of the Seoul metropolitan area, all students were able to return to schools.

Starting Monday, the South Gyeongsang Office of Education allowed elementary and middle schools with fewer than 300 students to have all kids back on campuses, while high schoolers were able to return to classes regardless of the student body size.

In a test run for the past week, South Chungcheong allowed schools with fewer than 900 students — a total of 673 out of 750 schools, or nearly 90 percent — to allow everyone back on campus.

Gangwon allowed 98 percent, or 1,007 of the province’s 1,025 kindergarten, elementary, middle and high schools, to let all students go to physical classes every day.

Sejong’s education office likewise allowed 114 schools with fewer than 750 students, or 82 percent of its total schools, to allow everyone back on campus.

The new school year — which was supposed to kick off at the beginning of March — started with remote classes in April, and teachers, students and parents alike have been adjusting to a hybrid of online and in-person lessons.

Monday marked one week since social distancing guidelines were lowered to Level 1 and with the exception of Oct. 15, when 110 cases were reported, the country kept daily new cases to below 100.

However, infections related to hospitals and nursing homes continue to be a worry.

Korea reported 76 new Covid-19 cases, as of Sunday midnight, according to the Korea Disease Control and Prevention Agency (KDCA), of which 50 were domestic infections and 26 imported.

This brings total coronavirus patients to 25,275, according to the KDCA Monday, with no additional fatalities recorded, keeping the total deaths at 444. 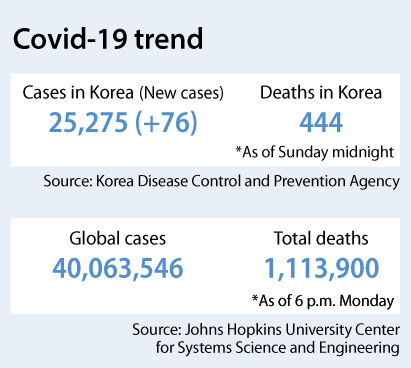 The average number of Covid-19 cases in the past week was 62.1 patients, similar to the week before.

Of the domestic cases, 11 were in Seoul, 15 in Gyeonggi and four in Incheon.

A cluster related to the SRC Hospital, a rehabilitation and treatment center in Gwangju, Gyeonggi, added 10 more cases, bringing total cases to 61 as of Monday noon, according to the city officials.

A nursing home in Busan reported 14 new cases, bringing its total to 73 patients so far.

Starting Monday, health officials kicked off coronavirus tests on 160,000 patients and people who work at or recently visited nursing homes, mental hospitals and hospitals for senior citizens in Seoul, Incheon and Gyeonggi.

Imported cases included five from Russia and three from the Philippines, as well as cases from Iran, the United States, Brazil and Mexico.

Health officials said they have not been able to detect a particular spike in cases over the Chuseok and Hangul Day holidays earlier this month but urged people to remain vigilant as the weather turns cooler and flu season returns.

People older than 70 can get free flu shots starting Monday to the end of the year, while people aged 62 to 69 can get theirs from next Monday.

However, worries over lax social distancing are growing as autumn foliage season begins and Halloween is celebrated at the end of the month.

One Blue House petition urged the government to restrict entertainment facilities like clubs on Oct. 31, where many young people celebrate Halloween.

The petition, which had some 800 signatories as of Monday afternoon, called for parties at clubs and entertainment facilities in hot spots in Seoul such as Itaewon, Hongdae and Gangnam to be restricted on Halloween Day, which falls on a Saturday.

It said that people “fear a recurrence of coronavirus transmissions as with the Itaewon club situation.”

A major cluster of infections emerged from a string of clubs and bars in Itaewon, central Seoul, in early May. High-risk businesses such as clubs and bars were recently reopened as the government lowered restrictions to Level 1.