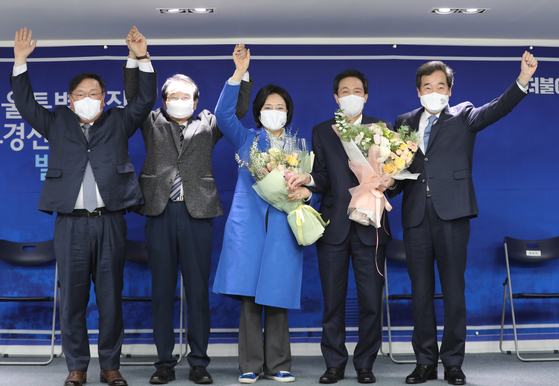 Park clinched her victory by crushing her contender, ruling Democratic Party (DP) Rep. Woo Sang-ho, in a public poll and winning nearly 70 percent of the ballots cast by voters over the phone and online.

"I will be utilizing all of my experience gained from my time serving as minister in tackling Seoul's problems and issues," she said in a speech following her victory at the party's headquarters in Yeouido, western Seoul.

It was the third time that Park declared her bid to run for Seoul mayor and the first that she won a party primary for the mayoral election.

Ruling and opposition parties and independents across Korea are narrowing down their candidates for the Seoul mayoral by-election coming up next month.

Earlier on Monday, Ahn Cheol-soo, chair of the minor opposition People’s Party, won the independents’ primary against his contender, former DP Rep. Keum Tae-sup, in another public poll. This brings him one step closer to his hopes of becoming a single candidate for the opposition parties, a hope he has expressed multiple times in media interviews recently.

The main opposition People Power Party (PPP) has yet to hold its party primary. Four candidates have cast their bids to run for mayor of Seoul, and the party will be holding its primary through Wednesday via a public poll, deciding on the finalist by Thursday.

It remains to seen if the PPP candidate will be able to unify forces with Ahn, who has been leading the popularity polls amongst opposition candidates for Seoul mayor.

“[The opposition bloc] must be quick to unify around a single candidate,” Ahn wrote on his Facebook account immediately after his primary win on Monday.

But the timing of it all remains unclear.

“It makes sense, from Ahn’s point of view, for the opposition bloc to unify around a single candidate as soon as possible,” a member of the PPP told the JoongAng Ilbo. “But the PPP’s strategy is to decide on the unified candidate last minute in order to build up the candidate’s popularity and to give it a boost nearer to the date of the by-election.”

March 9 is the deadline for all sitting lawmakers to resign from their posts to run for the by-election, and all candidates for the race have to register by March 19. The by-election is slated for April 7. Early voting starts on April 2.

Whether the liberal bloc will produce a single candidate also remains to be seen.

Park’s contenders in the bloc are Rep. Cho Jung-hun from the Transition Korea party and Kim Jin-ai of the Openminjoo Party. Park and Cho have agreed to hold discussions and make a decision by March 8.

Kim has agreed on the need for the liberal bloc to produce a single candidate, but has voiced her oppositions to having all three compete for the spot simultaneously. She has suggested a one-on-one competition between Park and herself.