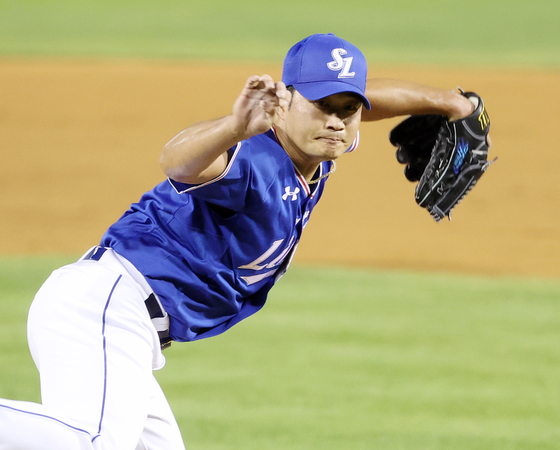 
Samsung Lions veteran and former major leaguer Oh Seung-hwan has one goal for the 2021 season — focus on getting the Daegu club back on track.

The Lions have been holding their spring training at Daegu Samsung Lions Park this year, as every KBO club trains somewhere close to home rather than heading overseas during the Covid-19 pandemic.

“It’s my first time training in Korea since I became a pro,” said Oh. “Not only our team, but everyone is in the same condition. I think we are doing well so far.”

After Kwon Oh-joon and Yun Sung-hwan retired after last year, Oh became the top veteran on the Samsung team.

Oh pitched for the Lions from 2005 to 2013, winning five championships and establishing himself as one of the most dominant closers in KBO history. Between 2014 and 2019, Oh played for the Hanshin Tigers in Japan's Nippon Professional Baseball league and the MLB's St. Louis Cardinals, Toronto Blue Jays and Colorado Rockies.

The 300 save milestone may be well within Oh's grasp, but his focus is a little different this year. Instead, Oh is focused on cutting down his blown saves, which totaled four last year.

"This year, I’m not aiming for the number of saves,” said Oh. "I'm trying to focus on reducing the number of blown saves for the team’s record.”

Although Oh, known as the Stone Buddha for his unflappable approach at the plate, is now 38, his performance hasn’t really taken a hit. After returning from the majors, Oh struggled in the first half of last year with one win, two losses, two holds and six saves with a 5.03 ERA across 18 games. Yet despite fears that maybe his time had finally come, Oh rebounded in the second half of the season with two wins and 12 saves with a dramatic 0.96 ERA across 27 games.

A right-handed pitcher, the strongest weapon in Oh's arsenal has always been his powerful four-seam fastball. Last season, however, his speed fell below 150 kilometers per hour (93 miles per hour), a notable drop for somebody who tends to rely on speed to keep batters on their toes.

"Last year, my pitching tempo was a little fast, but this year, I'm revising my form to throw more comfortably. I also want to throw the fastballs that the fans want to see. If my main pitching arsenal gets better, other pitches will also double in power."

As one of the oldest players in the Lions den, Oh has to work to communicate with younger Samsung pitchers. Rather than teaching, Oh tries to learn and reflect himself.

"There is an age gap but I talk with many players comfortably including Hong Joung-woo, Lee Seung-hyun, Yang Chang-seop, and Kim Yun-su,” Oh said. “Rather than the juniors asking me questions, we enjoy talking together and freely discuss baseball.”

“I don't like to think that I lead the team, because I don't want to harm the atmosphere. I also learn a lot [from young teammates]. We depend on each other and we seem to be in sync.”

Samsung has failed to qualify for the postseason for five years in a row, a huge fall from grace for the team that dominated the KBO less than a decade ago.

"I’m really excited for this year," Oh said. "Oh Jae-il has joined the team, and there are things that our current players have learned from not making it into the postseason. There were good times last year, and I'm going to make them last longer.”