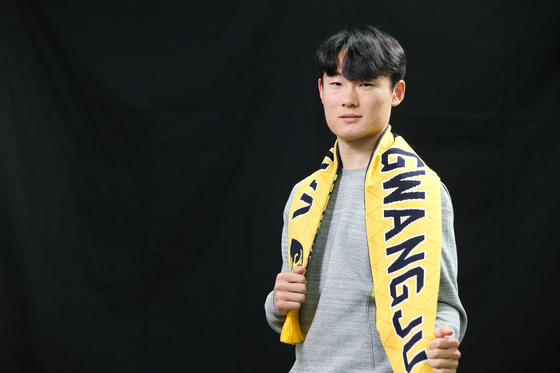 
Gwangju FC’s Um Won-sang, now in his third year as a professional football player, has lots to prove this season as one of the K League 1's rising stars.

Last season, Gwangju FC had its best year ever in the K League 1. Um scored seven goals and picked up two assists, becoming the second-highest scorer on the team after Felipe Silva with 12 goals. Gwangju successfully ended in the top half of the table, at sixth, for the first time in the club's short history.

Um's role in that success story was clear, and it wasn't long before the Taeguk Warriors came calling.

For the Gwangju striker, Nov. 17, 2020 is always going to be a memorable date. On that day, Um was substituted in for Korea in the 76th minute against Qatar, joining the senior squad for the first time in his career.

"I still remember my international senior squad debut,” said Um. “I felt nervous because I was playing with such great players, including [Tottenham Hotspur’s Son] Heung-min, [Leipzig’s Hwang] Hee-chan, and [Bordeaux’s Hwang] Ui-jo. But then Heungmin approached me, saying 'It's okay. Everybody feels like this at first.' I was so thankful. I thought to myself, I want to be a leader like him that others can turn to.

"I have participated in several international matches when I was in the youth team, but [the senior squad] felt completely different. I think I've grown up one step further while experiencing that tension that’s hard to put into words.”

Um is known for his speed, covering 100 meters in 11 seconds flat. Fans call him "Um Salah," a reference to Liverpool's Mohamed Salah, or "KTX," after Korea's high-speed railway.

“When I first joined the national team, I was intimidated because I seemed to be the only one lacking a lot," Um said. "But my teammates complemented me on my speed and I recovered confidence to analyze and learn the strengths of others."

An official from the Gwangju team said, "After playing in the national team, Um concentrates fiercely when he practices."

But Um isn't alone on the Gwangju squad, and the outlook for the team isn't looking too bright this year.

A large number of key players have left the team, including winger Willyan da Silva Barbosa and central defender Rustamjon Ashurmatov. As a result, Gwangju is considered a strong candidate for relegation this season.

In addition, Gwangju has one of the smallest budgets in the K League 1, beaten only by the military team Gimcheon Sangmu. Last year, the total annual salary of the Gwangju team was 4.5 billion won ($1 million), only 26.6 percent of the Jeonbuk Hyundai Motor's 16.9 billion won.

"Since several key members, including current FC Seoul manager Park Jin-sub, have left, it may seem like a crisis from the outside,” said Um. “But we, the players, think differently. We have strongly united around our new manager, Kim Ho-young. Avoiding relegation is the priority, but if we have a good flow, we can show more.

"I really want to beat FC Seoul to show that Gwangju FC is alive and well. After I score a goal, I’ll see how manager Park (Jin-seop) looks," he added.

Gwangju FC played their K League 1 opening match against Suwon Samsung Bluewings at Suwon World Cup Stadium on Sunday, and lost 0-1. They will be back in action at home against Ulsan on March 6.