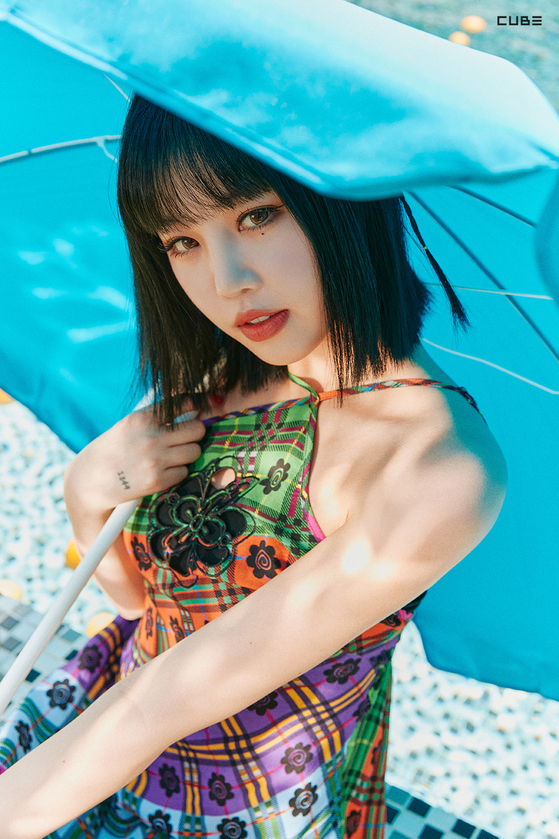 
Soojin of girl group (G)I-DLE has halted all her schedules, and the band will continue activities with the five remaining members for the time being, her agency Cube Entertainment announced Thursday evening.

This comes after accusations of the girl group member bullying her classmate were made last month.

"We apologize for not releasing a statement faster," her agency said, explaining that it "took a lot of time to verify all the facts."

On Feb. 19, a netizen claiming to be an older sister of Soojin’s middle school classmate posted a long comment on an internet post about celebrities' histories of school violence, alleging that the K-pop star was also a bully.

The anonymous user claimed that Soojin "made my sister and her friend slap each other by calling them into a girl’s toilet, and spread rumors that [my sister] is a loner."

The user followed with an additional post the next day, detailing on more of Soojin’s misdemeanors, such as extorting money from schoolmates and smoking and drinking underage.

Soojin denied the rumors and wrote on her Instagram that she was indeed "a student that drew attention" but that "bad rumors always followed" her.

She admitted that she "did dress inappropriately as a student, and my curiosity led me to smoke several times" but did not bully or hurt anyone.

Cube Entertainment explained on Thursday that while she did have a fight with a peer in middle school, "other accounts of violence as alleged by the posts' authors were not verified."

"We suggested that the people at matter meet in person rather than their representatives, but all parties involved refused. But should anyone wish for a face-to-face session, the arrangement will be made swiftly," the agency said.

Cube Entertainment apologized once again for the inconvenience that has been caused due to the news, but warned that firm legal measures will be taken against anyone spreading false rumors or writing vicious comments.