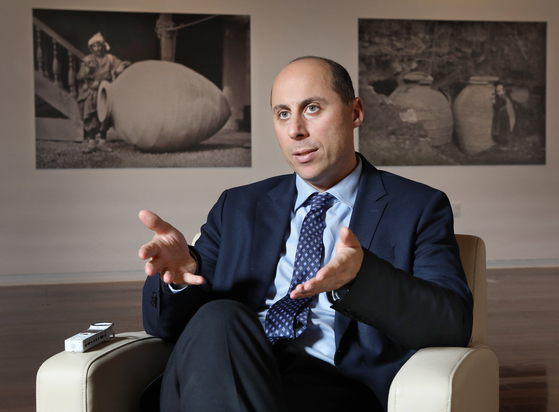 Georgian Ambassador to Korea Otar Berdzenishvili speaks with the Korea JoongAng Daily at the Korea Foundation Gallery on Thursday about the exhibition, ″Georgia - The Cradle of Viticulture.″ [PARK SANG-MOON]

Eight thousand years of uninterrupted history in winemaking is on display at a special exhibition at the Korea Foundation Gallery in Seoul.

“The first traces of grapes and vessels for winemaking in Georgia date back to the 6th millennium B.C., and since then we have had an uninterrupted winemaking tradition,” Otar Berdzenishvili, ambassador of Georgia to Korea, told the Korea JoongAng Daily at the gallery on Thursday. “Even the word for wine in Georgia, gvino, may have influenced how the word is used and pronounced in many parts of the world today.”

A few years back, archaeologists discovered the earliest evidence of wine made from the Eurasian grape through wine residue on pottery shards uncovered in Georgia that date back to 6,000 B.C. 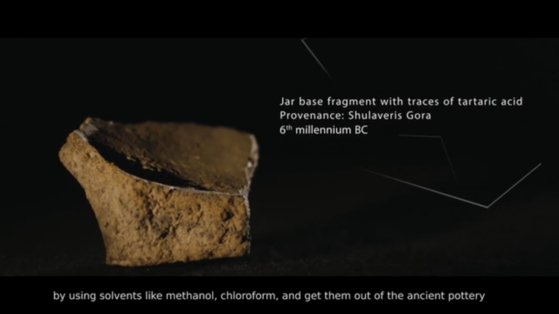 The exhibition, “Georgia - The Cradle of Viticulture,” showcases photos from an original exhibition curated by David Lordkipanidze, a world-renowned scientist and director general of the Georgian National Museum, first hosted at La Cité du Vin in Bordeaux, France. The exhibition has been brought to Korea by the Georgian Embassy in Korea and the gallery in cooperation with the museum and the National Wine Agency of Georgia.

The exhibition is available both online and offline through April 1. The gallery is closed on Sundays and on national holidays. Reservations must be made in advance.

To get a quick description of the exhibition, the Korea JoongAng Daily sat down with Ambassador Berdzenishvili. The following are edited excerpts of an interview in which the top envoy from Georgia shares details of the winemaking history of Georgia, including the unique Qvevri winemaking method, and how the industry may be adapting to changing consumer demands in a pandemic-stricken world.

Q. What should visitors expect to see at the exhibition?
A. Upon entry, visitors will be greeted with a timeline of the winemaking history of Georgia. The photos of artifacts stand as testament to that timeline. From a belt detailing a banqueting scene in the 4th century B.C., to the relief on the east façade of the Cathedral of the Virgin in Martvili, one of the oldest surviving churches in Georgia, you will see that winemaking and wine-drinking have long been part of the lifestyle of Georgians. The exhibition also showcases a video installation produced by Mago Installation in cooperation with the Georgian National Museum, which shows how wine was very much part of religious rituals and ceremonies in Georgia, as much as they were part of secular celebrations. The exhibition online showcases photographs and interviews with the wine experts and archaeologists in Georgia as well.
In a nutshell, the exhibition explains how the winemaking tradition came to define the DNA of the Georgian people. If you ask a Georgian how old the country is, it’s fair to say that they could respond that the country’s history began with the winemaking tradition. 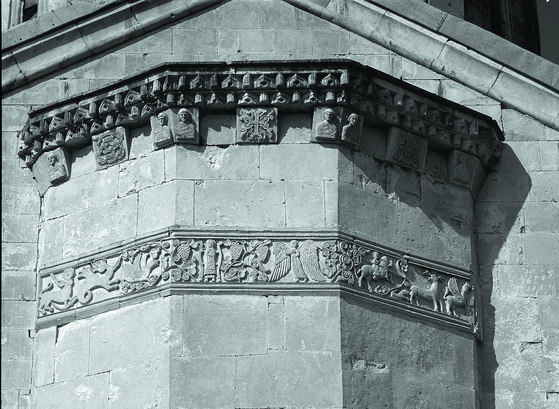 Bas-relief from the east façade of the Cathedral of the Virgin in Martvili, which dates back to the 7th century. Part of the Dimitri Ermakov photo-collection. [GEORGIAN NATIONAL MUSEUM]


Q. We heard that there is a unique winemaking process only found in Georgia.
A. There are three types of wine in Georgia, the red, white and the amber wine. The amber wine is made organically using clay vessels called Qvevri. The country’s traditional winemaking method using Qvevri was acknowledged as unique by Unesco in 2013. You will see in the exhibition what some of these vessels look like, with some larger than a person. This winemaking method is still practiced throughout Georgia, with each town making wine from grapes grown locally – and there are more than 500 types of grapes for winemaking in Georgia. Organic wine made using the Qvevri winemaking method is rising in demand throughout the world as people are looking for something new to try.

Q. With the onset of the pandemic, wine sales in Korea have actually experienced a boost. Has this had an impact on Georgian wines in Korea?
A. Our wine exports to Korea grew by over 200 percent in 2020 compared to 2019. The pandemic has changed how we think, consume goods and market products. For instance, in Korea, consumer demand for wine, especially at convenience stores, increased during the pandemic. The Georgian government is working closely with Korea to respond to these trends. We launched feasibility studies for a Georgia-Korea FTA in February. This is a particularly exciting development in bilateral relations as we look forward to celebrating our 30th anniversary next year. 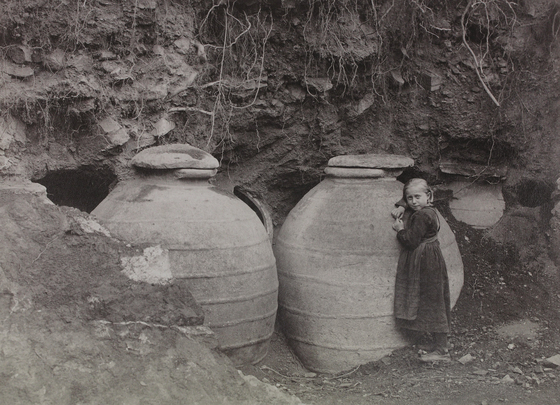 A photo part of the collection by Dimitri Ermakov, provided by the Georgian National Museum and exhibited at Korea Foundation Gallery through April 1. [GEORGIAN NATIONAL MUSEUM] 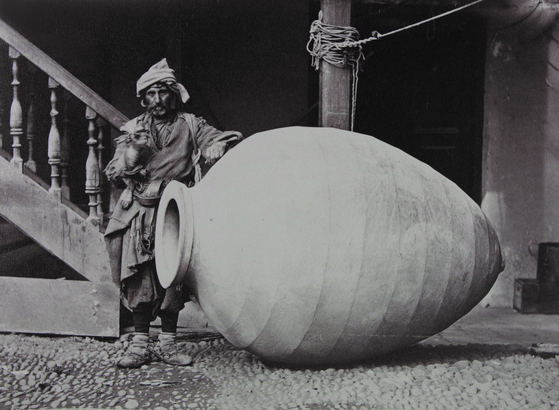 A photo part of the collection by Dimitri Ermakov, provided by the Georgian National Museum and exhibited at Korea Foundation Gallery through April 1. [GEORGIAN NATIONAL MUSEUM]

Q. As the Georgian ambassador with four years of living experience in Korea, do you have any tips on what Korean cuisine goes well with Georgian wine?
A. I’ll share some recommendations based on my experiences of trying amber wine with Korea cuisine. The amber wine goes well with pork, beef, or heavy food in general. It also goes well with most Korean banchan [side dish], including kimchi and any dishes incorporating kimchi. Kimchi-making and the Qvevri winemaking tradition also go hand-in-hand in terms of their recognition by Unesco: They were inscribed on Unesco’s list of intangible cultural heritage of humanity in the same year, in 2013.


Q. There is another heritage of the Georgian people associated with its wine: The Supra or the feasts. It has been a tradition amongst Georgian communities to host banquets full of friends and families, which gave rise to their unique toastmaster culture. The artifact that stands in testament to this culture is also part of the exhibition in Korea. Can you tell us more about that heritage?
A. The statue, “Tamada,” or toastmaster, was found in Vani, Georgia, and dates back to the 6th or 7th century B.C. It shows a figure of a person holding up a horn used at the time as a wineglass. According to our tradition, when we are holding a feast, the table chooses a toastmaster. The toastmaster must be equipped with in-depth knowledge of philosophy, and must have a knack for entertaining guests through interesting conversation. To put it in the cultural context of Korea, the toastmaster is the emcee of the table. The gatherings would have been quite great in size, and the toastmaster would often have deputy toastmasters to manage the tables. One of the major toasts in Georgia is the toast for peace, a tradition that lives on today.
The Supra has been submitted for review by Unesco for possible inscription into the Representative List of Intangible Cultural Heritage. If it is inscribed, it will be the fifth on the list from Georgia, following Georgian polyphonic singing, the ancient Qvevri winemaking method, the living culture of three types of Georgian alphabet and Chidaoba, a form of Georgian wrestling dating back to ancient times. It will be quite timely if it is inscribed by Unesco this year, as we celebrate the 30th anniversary of the referendum for our declaration of independence. 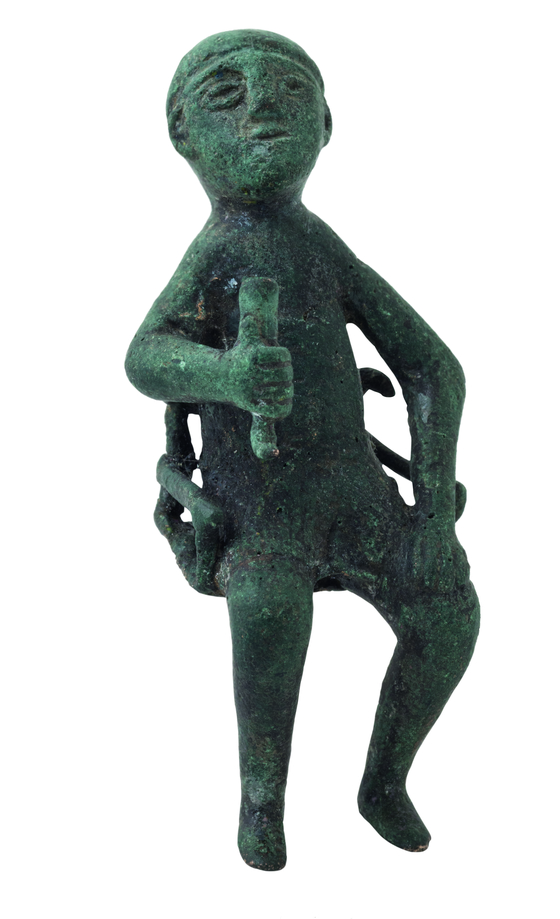 “Tamada” statuette. Bronze. Provenance: Vani. 7th-6th century BC. H. 7,5 cm, W. 4 cm. This statuette depicts a man seated in an armchair, holding a drinking horn in his right hand. It attests to the importance of winegrowing in ancient Colchis and mirrors an important tradition continuing today at Georgian feasts with the “Tamada” (Toast Master) at the head of the table. Caption provided by the Georgian National Museum. [GEORGIAN NATIONAL MUSEUM]