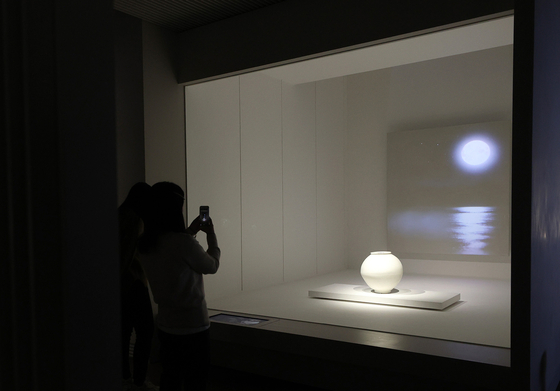 The National Museum of Korea recently opened a “moon jar”-inspired room in its White Porcelain Gallery. Moon jars are a type of round, large white porcelain vase made during the Joseon Dynasty (1392-1910). [YONHAP]


Moon jars, a type of round, large white porcelain vase made during the Joseon Dynasty (1392-1910), originally did not have that name. While the jar emerged around the late Joseon era, the name “moon jar” did not appear until the early 1900s.

Who coined this beautiful and poetic name?

It is said to be either modern art virtuoso Kim Whanki (1913-1974) or his close friend Choi Sun-u, former director-general of the National Museum of Korea.

From the 1950s, Kim often painted round white porcelain jars paired with a blue full moon. He also wrote poems and essays comparing the jars to moons.

“Kim started buying pottery after Korea’s liberation [from Japan in 1945]. One such type of white porcelain jar was called marutsubo in the colonial times because it was round [in Japanese, maru means “round” and tsubo means “jar”], and that was his favorite. So he named it ‘moon jar,’” said antique art dealer Hong Ki-dae.

However, the first time the term “moon jar” was published was not in Kim’s writings, but in a newspaper column written by Choi in 1963.

“Today, an old silver-haired visitor came by and started patting a milky-white moon jar. The visitor muttered, ‘[the jar] looks like a good-looking daughter-in-law,’ and seemed quite delighted,” Choi wrote.

Toward the end of his column, Choi mentions his friend Kim’s love for the jars, suggesting that the two men exchanged ideas to establish the term “moon jar.”

This reporter researched how many times the word “moon jar” appeared in newspapers published before 1950. The word was almost never used up until the 1980s and seldom appeared in the 1990s, but then its usage started rising exponentially in the 2000s. As the usage of the term increased, so did the public’s interest in those white porcelain jars.

The 2000s saw a number of major events regarding moon jars. The British Museum in London collaborated with Korea to open the Korea Foundation Gallery in 2000, presenting an 18th-century large elegant jar as the gallery’s key artifact and introducing it as a "moon jar." This romantic name contributed to the artifact’s rise to becoming one of the British Museum’s most popular displays and caught the eyes of European writers and artists such as Alain de Botton.

Another turning point was when Seoul’s National Palace Museum of Korea opened in 2005, with the "White Porcelain Moon Jar" as its opening exhibit, marking the first time a national museum officially used the word “moon jar” in the title of an exhibit.

“Moon jars are the ultimate form of Korean beauty,” wrote Yoo Hong-jun, the former head of the Cultural Heritage Administration, in the preface to the exhibition’s brochure.

The National Museum of Korea recently renovated its White Porcelain Gallery on the third floor, dedicating a separate section for a moon jar. Media art featuring a white full moon reflected in water projects on the wall behind where a moon jar is displayed. Such sensual curation wouldn't have been possible if this space was called the "large white porcelain jar section."

In February, members of K-pop boy band BTS revealed “ARMY’s Room,” a series of drawings of how they would decorate rooms for their fans, who refer to themselves as ARMY. Member RM’s drawing featured a moon jar and a sabang takja, a traditional Korean shelf unit designed to be open from all sides.

“I hope the soft curves of the moon jar and the straight lines of the sabang takja go well together to give my fans a sense of comfort,” said RM.

Had he said the “soft curves of the large white porcelain jar,” it would've been very difficult to feel the soft and comfortable ambiance of the room. A catchy name really is key. 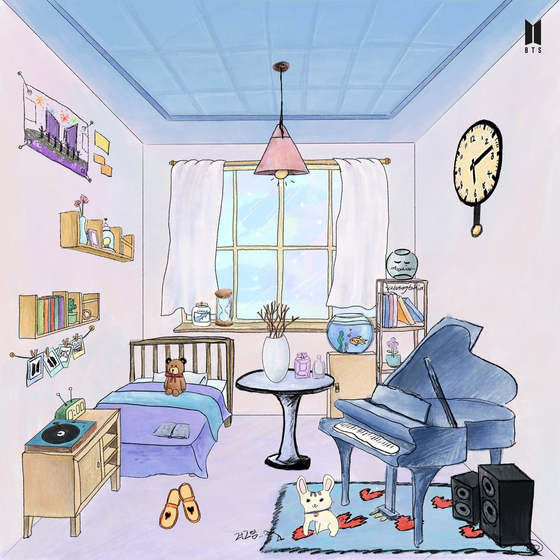 
However, it's not just the catchy name that has led to moon jars being referred to as a "project of the modern era."

The descriptions often used in relation to the jars, such as "simplicity," "the beauty of the color white," and "the beauty of natural distortion" were in fact first used during the colonial era by Soetsu Yanagi (1889-1961), a Japanese art critic and founder of the Mingei – Japanese for “folk craft” – movement.

The current aesthetics of moon jars was established by Korean artists and critics as they accepted, and simultaneously overcame, Yanagi’s views.

As the founder of the Mingei movement, Yanagi believed that craftwork used as everyday items — by the people and for the people — was more important than luxury craft items for the upper class. He praised the beauty of Joseon-era white porcelain, which was for commoners as opposed to aristocratic Goryeo-era celadon or Joseon Dynasty noblemen’s porcelain writing supplies.

“In the early 20th century, Japanese folk art scholars such as Yanagi significantly contributed to the West's coming to appreciate Korean pottery,” the British Museum explains, which is true. Kim and Choi also became attracted to moon jars partially due to Yanagi’s influence.

One of Yanagi’s views, which defined Joseon’s beauty as a passive “beauty of sorrow,” was later met with backlash. Yanagi claimed that the narrow base design of Joseon-era jars symbolizes a lack of stability, subconsciously reflecting the “pain and sorrow the [Korean] people have experienced.”

On the other hand, late artist Kim thought of the moon jar’s narrow base as “avant-garde.” He compared Joseon-era white porcelain to buildings designed by Le Corbusier, a Swiss-French architect and pioneer of modern architecture.

The comparison was a fitting one considering Le Corbusier’s signature pilotis design, in which supporting columns, or pilotis, are used on the ground-level of a building for an elevated look, matching Kim's description of moon jars having “bases so narrow that they look as if they are floating.”

Such aesthetic discourse is behind today’s notion that moon jars are an icon of Korean beauty. Moon jars are indeed, the best example of branding in Korean cultural history, combining philosophy with sentimental value.

Recently, however, some try to freeride on the well-made brand by comparing irrelevant designs to the moon jars. Some Korean galleries in art museums abroad randomly display a contemporary artist’s moon jar without any context, which seems to make the jars look insignificant.

Building the reputation of moon jars took a century of discourse. This kind of successful cultural branding only happens once in a blue moon; it should be carefully handled.


Star of the British Museum 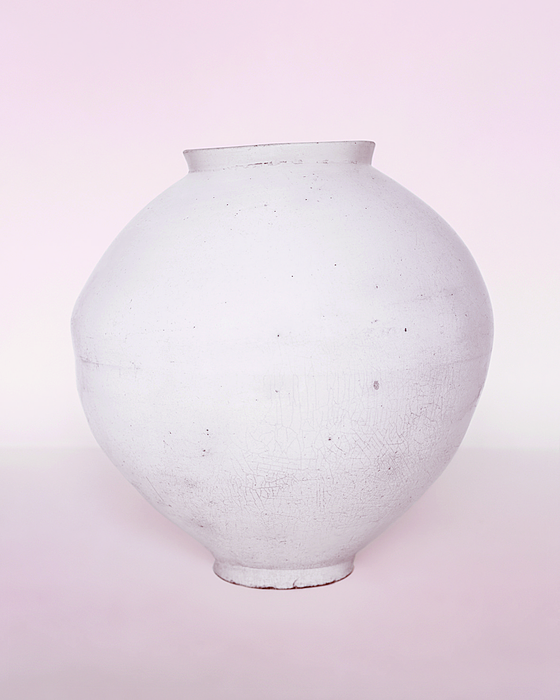 “BM04” (2006) by photographer Koo Bohnchang, a photo of the moon jar at the British Museum. [KOO BOHNCHANG]


“I cannot even describe how sad I am leaving Seoul Station. I feel like I’m leaving a piece of my heart behind," said studio potter Bernard Leach (1887-1979) in 1920, on his way back from a trip to Korea together with his friend Yanagi. Leach, dubbed the “father of British studio pottery,” had become infatuated with the charms of Korean pottery after visiting the Yi Royal Family Museum at Changgyeong Palace.

Leach visited Korea again in 1935 and became more mesmerized with the “natural unselfconsciousness” of Joseon-era white porcelain. He bought some pieces and brought them back to Britain, one of which is the moon jar that is housed in the British Museum, a star artifact that appears in the museum’s guidebook.

Leach’s art philosophy was “East meets West” and “handicraft resisting industrialization.” Joseon-era white porcelain inspired him greatly, and he diligently told people around him about moon jars. In 1943, he gifted a moon jar to a fellow studio potter Lucie Rie (1902-1995), which Rie kept in her studio until her passing.

Photographer Antony Charles Robert Armstrong-Jones, who was the Earl of Snowdon and also married to Princess Margaret of Britain, photographed Rie in her later years. The moon jar was always beside Rie in the photos.

In the late 1980s, photographer Koo Bohnchang came across a picture of Rie in a magazine, which made a striking impression on him. Koo said he saw an uncanny resemblance between the elderly potter and the old jar.

Koo, who had already been deeply interested in objects that had stood the test of time, started photographing Joseon-era white pottery afterward. In order to amplify the white porcelain’s sense of austerity, he removed the gloss from the porcelain’s surface, resulting in painting-like photos that feel spiritual. The moon jar at the British Museum was a part of this series, and Koo’s photograph fueled the craze for moon jars even further, both in Korea and abroad.

The modern concept that moon jars represent Korean beauty is a product of such Korean artists’ research to find the identity of Korean art, while also taking foreign perspectives into account.