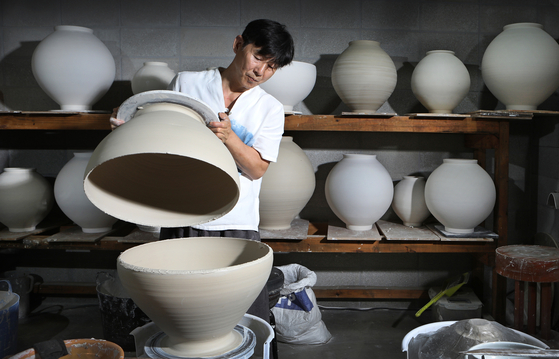 Ceramic artist Shin Chul assembles the upper part of a moon jar with the lower part at his ceramic studio Huguro-Bitzun-Dal, located in Icheon, Gyeonggi. [BY PARK SANG-MOON]


Traditional rounded white porcelain, reminiscent of a full moon, is one of the representative cultural heritages of Korea. Often dubbed as a moon jar, the plump porcelain first appeared during the late Joseon Dynasty between the end of the 17th century and beginning of the 18th century. And three centuries after its advent, the simple white jar is still loved.

From a cultural perspective, moon jars are valuable assets as only about 20 pieces remain both at home and abroad.

Ceramic artist Shin Chul takes inspiration from the potters of the Joseon period.


The artist began making moon jars in 2005 and has produced more than 1,000 pieces so far. No one has ever baked moon jars as intensely as Shin.

Born in Wonju, Gangwon, Shin grew up as an ordinary child in the countryside. As he was entering into adolescence, Shin came across a pottery wheel during an art class back in high school. This chance encounter led to a decisive change in his life.

He firmly believed that making porcelain was meant to be his job for the rest of his life. He eventually decided to learn how to make porcelain instead of advancing to college.

Shin landed a job at Hanyang Porcelain Lab located in Jongno, central Seoul before he had even graduated from high school. But his day job did not appease his thirst for ceramics. He headed to a pottery kiln located in Byeokje, Gyeonggi.

During the day, Shin worked at the porcelain lab and at night he learned the techniques needed for baking ceramics at the kiln in Byeokje.

Senior workers around Shin advised him to go on to college if he was really serious about pursuing a career as a potter. Otherwise, they said he wouldn't be taken seriously as an artist. 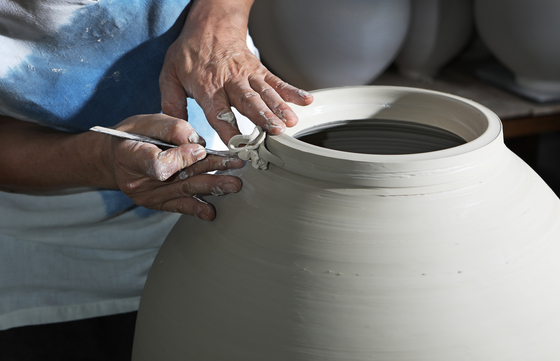 
His life took many twists and turns before he entered the department of ceramic arts at Dankook University but after he was admitted, his only focus became studying.

As Shin made the best use of his days by studying and spent his nights at kilns in Byeokje and Gimpo, he only found time for some shut-eye while commuting on buses.

Shin, who stood out among his fellow students, made more than 300 pieces of porcelains every day.

After he graduated and completed his mandatory military service, Shin got married and opened a studio of his own in Deokso, Gyeonggi in 1989. He was 28 years old.

Until he moved his studio from Deokso to the Ceramic Arts Village in Icheon, Gyeonggi in 2016, Shin tirelessly baked porcelain in Deokso for 27 years.

After settling down in Icheon, which is known as Korea's ceramics home, Shin began giving lectures at the Chungkang College of Cultural Industries, also located in Icheon. He continued his teaching for the next 15 years.

Shin's expertise is the moon jar but he also used to produce celadon porcelain, or cheongja.

Of all the techniques used for cheongja, Shin is particularly talented at creating yeollimun, or marbled patterns. This technique thrived in the 12th-century Goryeo Dynasty for a short period of time. The pattern was mostly used for tea bowls or containers for loose powder. Only about 10 pieces of cheongja with yeollimun are left across the world. 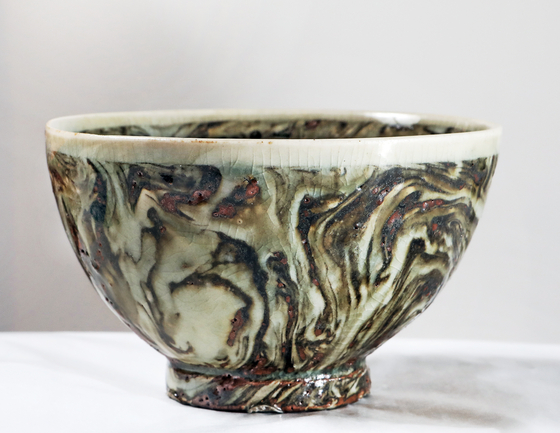 Shin’s reproduction of celadon porcelain, or cheongja, with yeollimun, or marbled patterns. [BY PARK SANG-MOON]


Shin dedicated himself to reproducing yeollimun for 14 years from 1983. He also wrote about this particular reproduction procedure as a thesis. His creations sold out the year he held his first exhibition in 2001.

While working on cheongja with yeollimun, however, Shin felt he was limited as an artist. He thought it was hard for him to create something traditional that can show the beauty of Korea with yeollimun.

It was one day in 2005 when Shin saw an exhibition themed on moon jars held at the National Palace Museum of Korea that his "aha" moment struck and he realized he had to work on moon jars.

In late 2005, Shin began working on moon jars. A series of trials and errors awaited him.

Over the next nine years he created over 1,000 moon jars. Despite painful shoulders and the tremendous cost of purchasing soil and firewood, he persisted.

But things didn't go as well as Shin hoped. During an exhibition in Tokyo, Japan in 2010, a Japanese professor said, "I can't find Shin Chul in his moon jars."

The artist was dismayed and the criticism sent him into a five-year slump.

But a pine tree Shin saw near the Jungyeongmyo Royal Tomb at Samcheok, Gangwon was the inspiration he needed.

Shin decided to make a moon jar that was as confident and healthy as the pine tree, often dubbed the most beautiful pine tree in Korea. 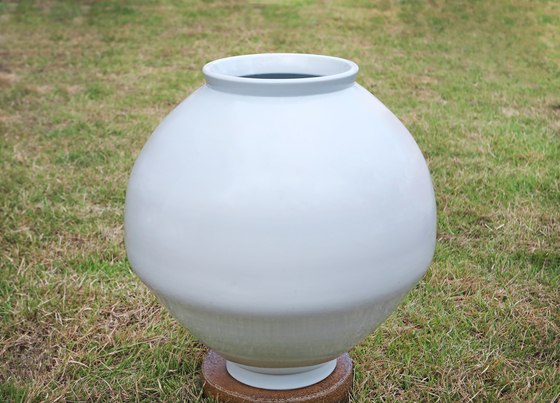 A moon jar created by Shin. [BY PARK SANG-MOON]


Shin's moon jars are not just round porcelain. The curve that starts from the opening embodies its humble beauty while the foot, which sustains the globular shape, is confident. All these features are created by the hands of Shin and resemble the pine tree the artist saw at Samcheok.

In the early days, Shin wanted to address the original personality of moon jars. Then he focused on showing the healthy sides of porcelain. These days, he pays attention to the pure nature of ceramics, which is not only about being good and gentle but also about harmony with nature.