CheongKwanJang red ginseng is a hit in Middle East

CheongKwanJang red ginseng is a hit in Middle East 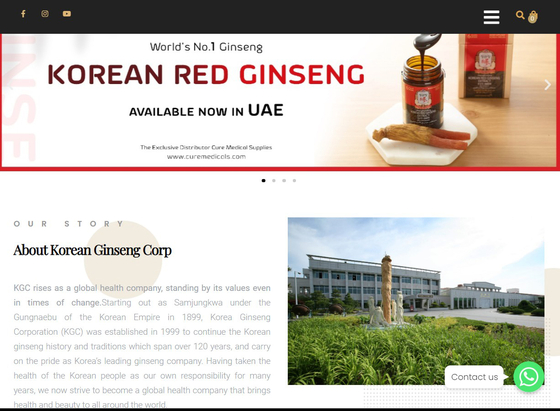 The Covid-19 pandemic has shed light on the critical importance of immunity. Global interest in immunity boosters has surged since the outbreak of Covid-19, which led to the increased popularity of health products worldwide.

In Korea, red ginseng is flying off the shelves.

Red ginseng products are the most sought-after health supplement in Korea. According to the Korea Health Supplements Association, the annual red ginseng market here is worth some 1.4 trillion won ($1.2 billion).

The efficacy of red ginseng has been proven scientifically. Officially certified by the Ministry of Food and Drug Safety of Korea, red ginseng is a health food that helps improve blood circulation, boost immunity and enhance memory.

The clear frontrunner in the market is CheongKwanJang, the red ginseng brand from the Korean Ginseng Corporation (KGC), which takes up 70 percent of the market.

CheongKwanJang’s unmatched popularity stems from expertise accumulated throughout 121 years of long-standing tradition. The company has earned the public trust with the ceaseless effort put into research and development and thorough quality control measures, using only six-year-grown ginseng cultivated through a strict process.

Picking up momentum, Korean red ginseng is now making a foray into the Middle East.

From Feb. 21 to 25, KGC participated in Gulfood 2021, the biggest food exhibition in the Middle East.

KGC set up a promotional booth introducing CheongKwanJang red ginseng and signed a memorandum of understanding (MOU) with Cure Medical Supplies, a local importer based in Abu Dhabi in the United Arab Emirates.

KGC plans to make further inroads into the Middle East with the United Arab Emirates as its foothold.

CheongKwanJang red ginseng is exported to more than 40 countries across the globe, including the United States, China and Japan.

Acknowledged as one of the most effective and high-quality medicinal herbs, red ginseng has been well-loved in Asia for a long time. Korean presidents often present foreign leaders and dignitaries with CheongKwanJang red ginseng products, the most representative of Korean health food and culture.

KGC is opening an online store (www.kgcuae.com) targeting consumers from the Middle East and also launching a brand shop on Amazon, the biggest e-commerce market platform.

Furthermore, Korean red ginseng and other health products from KGC will be available offline through local pharmacies. More than 10 offline stores will introduce Korean health products to the Middle Eastern market along with the online shops.

“Korean ginseng has been recognized for its quality, even reaching Europe via the Middle East,” said Oh Sang-min, the KGC director in charge of the project in Dubai. “More and more people are seeking red ginseng to strengthen their immunity amid the pandemic crisis and now CheongKwanJang red ginseng products are available in the Middle East both online and offline.”

KGC also signed an MOU with the International Vaccine Institute to cooperate on developing immunity boosters. KGC will provide the institute with twelve varieties of ginsenoside found in red ginseng to help with vaccine development.