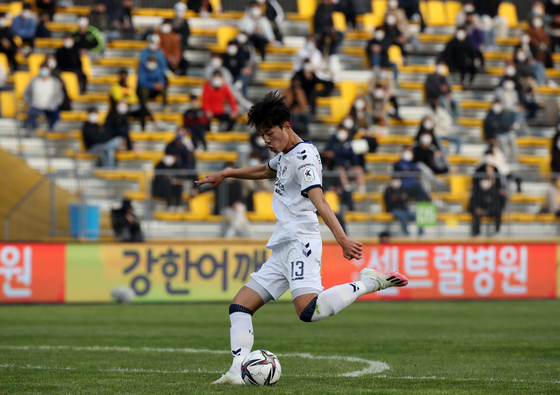 Kim Min-jun of Ulsan Hyundai scored the opening goal during his team's match against Gwangju FC at Gwangju Football Stadium on March 6. [YONHAP]


The K League 1 introduced new rules this season to encourage teams to make more use of their younger players.

While the new rule, which rewards clubs for including younger players in their squad, may have been created with good intentions, the first few weeks of play suggest the system may not actually benefit young players as some teams look to bend the rules.

Starting this season, K League 1 clubs are allowed to make up to five substitutions in a match if they have at least two players under 22 years old on the squad and at least one in the starting 11. If only one of the younger player starts, the team has to use one of those five substitutions to bring on a U-22 player, or they'll be knocked down to three substitutions.

The new rules are designed to develop talented young players and allow them to compete on the big stage, and there is some evidence that is working — Ulsan Hyundai’s Kim Min-jun and Incheon United’s Ku Bon-cheol both scored their K League debut goals on March 6.

In total, nine U-22 players made their professional debuts during the second week of K League fixtures, more than twice last year’s number, at four.

But there are concerns that it will make it difficult for teams to play normally if U-22 players are brought on for a short period in order to permit more substitutions, especially if the younger players only get to make a token appearance on the pitch.

The following week on March 7, Suwon FC put two U-22 players into their starting lineup, Cho Sang-jun and Lee Gi-hyuk, but they were replaced after only 19 minutes.