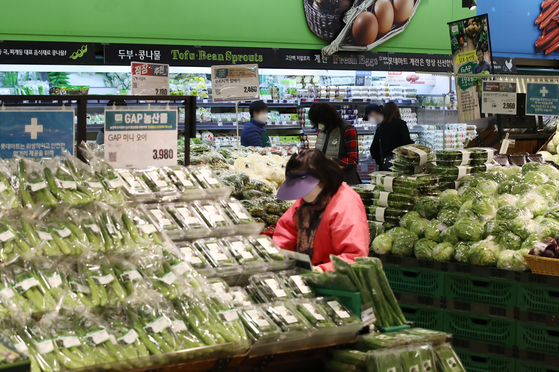 A shopper looks at vegetable at a discount store in Seoul on March 8. There has been growing worries over rising prices especially of food. [YONHAP]


The Bank of Korea is likely to keep monetary policy loose despite increasing signs of inflation as the economy recovers from the pandemic.

It believes that despite mass vaccinations globally, economies will continue to struggle and job market challenges will remain.

The biggest concern that the Korean central bank raised is the growth of debt resulting from expectations of rising asset values, including local shares and real estate.

According to a report on monetary and credit policy by the bank on Thursday, recently Korea’s consumer prices have been showing signs of sharp increases.

The bank said this was largely driven by the rising international energy prices since late last year.

Local energy prices, linked to both crude and natural gas prices, rose nearly 5 percent from June 2020 to January this year.

Food price increases are most pronounced, including the prices of poultry, vegetables and eggs.

The price of leeks has gone up so fast that people are calling them “geum pa,” which translates as “golden leek,” and some consumers have been raising leeks at home.

Concerns of rising inflation have also been detected in financial indicators, including U.S. Treasury prices.

The bank is not expecting inflation to be a problem.
In its report, the bank noted that uncertainty regarding Covid-19 will likely continue.

While vaccinations are already in progress in advanced economies, including the U.S. and Europe, there have been cases in which people are refusing to get vaccinated, while some emerging countries have not yet secured sufficient vaccine supply.

As such, herd immunity could come later than projected.

“The liquidity from global economic recovery and monetary easing policies is reflected in consumer prices,” said Park Jong-seok, the bank’s deputy governor. “While we have to be aware of spikes in consumer prices due to spending caused by demand that has been suppressed [during last year’s Covid-19] and [rising] raw material prices in the short term, due to Covid-19 uncertainties, the continuous expansion of inflation will likely be limited.”

The report did raise the alarm about rising debt levels.

As household debts have been rising at a rapid rate, the burden has been growing quickly.

It is especially concerned about individuals borrowing from financial institutions to buy stock and real estate since the second half of last year.

According to the central bank on Wednesday, household loans from banks for the first time exceeded 1,000 trillion won as of February.

In just a year, household loans have increased by 100 trillion won.

This figure could increase further if loans from non-banking financial companies, whose clients are mostly those with lower credit scores, are included.

The central bank noted that the rate at which local asset prices have been rising is faster than in other major countries, such as the U.S. or Germany.

According to the Korea Real Estate Board, since the second half of last year housing prices when compared to the previous month have been rising at a rapid pace. Last month the housing price rose nearly 0.9 percent compared to January’s.

“In the case of local asset prices, expectations of the loosened monetary policy continuing at home and abroad and projections of asset values rising has jointly contributed to the ongoing increase,” said Lee Sang-hyeong, head of the bank’s monetary policy department. “Because of the significant decline in housing supply in Seoul last year, housing prices grew rapidly and contributed to expectations of additional increase.”

The central said it expects household debt to continue rising.

Bank of Korea director Lee, however, said the rising stock prices are also contributing to the recovery of the real economy.