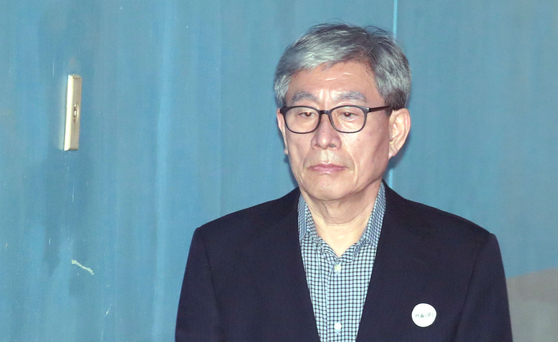 Won Sei-hoon, former head of the National Intelligence Service, heads to a hearing at a court in Seoul on May 15, 2019. [YONHAP]


The Supreme Court remanded a lower court’s ruling on a case of power abuse by Won Sei-hoon, former head of the National Intelligence Service (NIS) on Thursday.

Won, who led the NIS from 2009 to 2013, was indicted from December 2017 to December 2018 on nine criminal charges, including unlawful use of NIS funds to hire civilians to distort cyberspace opinions and interfering in domestic politics.

The charges came after the Moon Jae-in administration launched a reinvestigation into the NIS's past wrongdoings following President Moon's inauguration in May 2017.

The Seoul Central District Court sentenced Won to seven years in prison in February 2020, a decision that was upheld in an appeal trial at the Seoul High Court in August 2020.

The Seoul High Court, however, differed with the Seoul Central District Court on at least one matter: The high court acquitted Won of several charges of abuse of authority and obstruction of the NIS’s official duty in connection with his attempts to disadvantage liberal figures.

“What Won asked NIS officials to do does pertain to their ordinary duty,” the high court said in its ruling. “We cannot claim that Won was abusing his power to obstruct the duty of the officials.”

The Supreme Court found the acquittal faulty and remanded the case back to the Seoul High Court on Thursday.

“The high court’s interpretation on laws concerning power abuse was faulty,” the Supreme Court said in its statement Thursday.

If Won is found guilty of power abuse, his seven-year sentence may be lengthened.

In an earlier, separate case, Won was convicted on charges of instructing NIS officials to manipulate internet comments to sway public opinion ahead of the 2012 presidential election. The Supreme Court upheld a four-year imprisonment for him in April 2018, which he has since been serving.