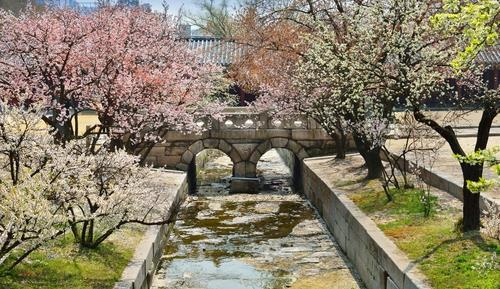 
Spring flowers of Joseon Dynasty (1392–1910) royal palaces and tombs in and around Seoul are expected to blossom in the middle of this month before reaching peak blooms in April, a government agency said Saturday.

The state-run Cultural Heritage Administration Royal Palaces and Tombs Center issued its spring flowering forecast for the four main royal palaces and Jongmyo Shrine in Seoul and royal tombs around the capital, saying this year's flowering time is expected to be two to seven days earlier than normal.'

In the middle of this month, blunt-lobed spice bushes on Gwallamji Pond at Huwon Secret Garden at Changdeok Palace and on terraced flower beds in the rear garden of Changgyeong Palace, both in central Seoul, will begin to bloom, the agency said.

Then, various spring flowers, such as plum, cherry and apricot flowers, will be in full bloom at the four main palaces, which also include Gyeongbok Palace and Deoksu Palace, and Jongmyo Shrine until late May, it forecast.

The promenades of royal tombs around Seoul, most of which have been recently refurbished to offer a unique vegetation environment and improve various convenience facilities for visitors, are also expected to showcase the blooming of various spring flowers such as cornelian cherry flowers, apricot flowers, peach blossoms and azaleas.

As part of efforts to comply with the Covid-19-related social distancing guidelines, the agency plans to emphasize mask wearing for all visitors to the palaces and tombs and recommend one-way movement on forest paths.'