Toss Securities opened its mobile stock trading service to all users on Monday.

The brokerage, which launched last month, is a wholly-owned subsidiary of Viva Republica, the operator of popular money transfer app Toss.

The grand opening comes after a partial opening to a limited number of users last month.

Starting with 1,000 users, the brokerage gradually opened to more people that had applied for early use. 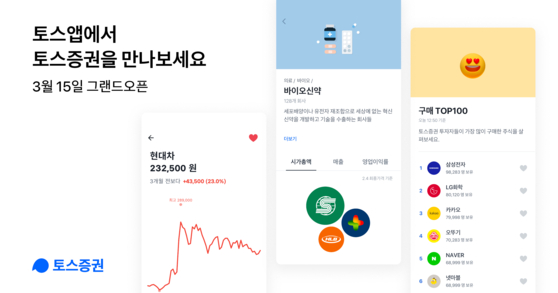 
Some 640,000 people had applied for early use since the company began taking applications on Jan. 27, according to Toss Securities.

As of Monday, 280,000 people have officially joined the brokerage's mobile trading system and 130,000 users have opened accounts for trading.

Among subscribers to the brokerage's mobile trading system, 38 percent were in their 20s and 30 percent in their 30s, according to Toss Securities.