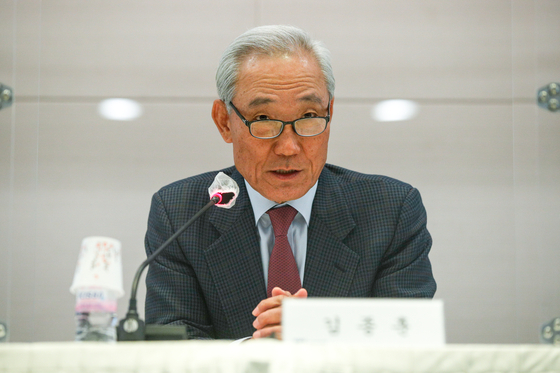 
The chairman of the SK Innovation board blasted a U.S. ruling against the company for intellectual property theft and suggested that a multi-billion dollar battery investment in the country could be abandoned or unloaded.

His harsh words and threat of a pullout come ahead of a decision by President Joe Biden on the ruling, as the executive has final say as to whether the decision stands.

On March 10, the SK Innovation’s audit committee met to discuss the issue and come up with countermeasures, as the company is now prohibited from importing electric vehicle (EV) batteries and components into United States for 10 years, with a few exceptions.

“ITC’s decision of prohibiting [SK Innovation] from operating the factories for 10 years is no different with commanding us to shut down the business,” chairman Kim Jong-hoon told to JoongAng Ilbo. “If it happened in Korea, the decision would have faced mounting criticism from the public as it's such an excessive measure.”

The conflict then continued as the companies filed multiple patent suits against each other. LG Chem last year also said SK Innovation was found to have deleted emails mentioning LG Chem, even after the ITC judge ordered digital forensic inspection of SK Innovation’s computer systems.

The ITC ruled in favor of LG Energy Solution on Feb. 10, and the U.S. administration has 60 days to review whether to veto the ITC ruling.

If the two sides come to an agreement within the review period, the ITC ruling could be overturned and SK Innovation could be free from the 10-year import restrictions.

“The board of directors pointed out that the practice of deleting related emails was a huge mistake that caused misunderstanding that SK Innovation stole trading secrets,” Kim said. “But the board members feel same as the company and we ‘feel sorry’ about the decision that ITC has made."

Chairman Kim is a well-known figure in business and public service for his contribution to the Korea-U.S. free trade agreement (FTA). Having served as minister for trade at the Ministry of Foreign Affairs and Trade between 2007 and 2011, he was Korea’s chief negotiator for the FTA talks with the United States.

Kim then started to blast the ITC ruling.

“It’s either the company gives up the battery business or find another partner country to run the business other than United States. We already delivered our opinions to the company.”

While the two companies are not confirming the exact amount, local press reports suggest LG Energy Solution has been calling for some 3 trillion won to 4 trillion won in compensation, while SK Innovation has been proposing a maximum of 1 trillion won.

Some say the stance of SK Innovation is the company's last move to persuade U.S. President Joe Biden to overturn the ITC’s ruling and to force LG Energy Solution reduce the amount of settlement money.

LG Energy Solution earlier the month sent a letter to U.S. Senator Raphael Warnock, suggesting that it would build its own battery plant in Georgia.

The company also announced that it will invest over 5 trillion won by 2025 and build at least two battery plants in United States.

Regarding the concerns over the possible economic slump that would be caused by the shutdown of SK Innovation’s plants in Georgia, LG Energy Solution said it is ready to do everything to help people there.

Georgia is where SK Innovation has promised $2.6 billion of investment and 2,600 permanent jobs with its own battery plants, currently under construction in Commerce, Georgia.

We are “prepared to do whatever we can to help the people and workers of Georgia,” Kim Jong-hyun, CEO of LG Energy Solution, was reported to have said in the letter to Warnock, according to the Atlanta Journal Constitution on March 13.

LG Energy Solution not only offered its own investment, but also seemingly suggested it could even take over the SK Innovation’s facilities.