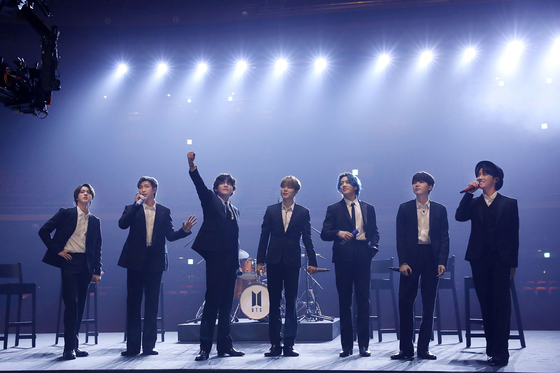 The seven members of the K-pop superstar band BTS perform in the online concert for charity ″Music on A Mission″ held by MusicCares. [BIG HIT ENTERTAINMENT]


The Grammys maintained its conservative notoriety, failing to acknowledge the global popularity of K-pop and megastar boy band BTS.

The 63rd Grammy Awards was held online on Monday, after being postponed from Jan. 31 due to Covid-19. The winner was announced at the Premiere Ceremony, the ceremony held before the official event where the majority of the winners are announced. The official awards ceremony will air on cable channel Mnet in Korea.

BTS was nominated for the Best Pop Duo/Group Performance award for “Dynamite” (2020), the band’s first all-English dance track released in August. The award recognizes new vocal or instrumental duos, groups or collaborative pop recordings. Although Korean classical musicians or gugak (traditional Korean music) musicians have been nominated and honored in the past, it was the first time for any musician from the genre of K-pop to be recognized at the Grammys.

The Best Pop Duo/Group Performance award went to Ariana Grande and Lady Gaga's "Rain On Me" (2020), once again proving the Grammy’s reluctance to honor foreign acts.

The anticipation for K-pop’s first award was more than high. Not only did the septet nab K-pop’s first-ever No. 1 ranking on Billboard’s Hot 100 singles chart in September with “Dynamite,” the band was also invited to perform as a nominee at the awards ceremony – also a first for any K-pop act. In addition, the Grammys announced a new list of 1,340 voting members of the Recording Academy in June 2019 including both BTS and its agency Big Hit Entertainment’s mastermind Bang Si-hyuk. The voting members are responsible for deciding who gets nominations and the awards.

But, according to music critic Kim Young-dae, the nomination itself is monumental. From being accepted as voting members of the Recording Academy to presenting an award last year and performing at the ceremony, BTS has slowly been forging a path into the mainstream American music market — a feat in itself.