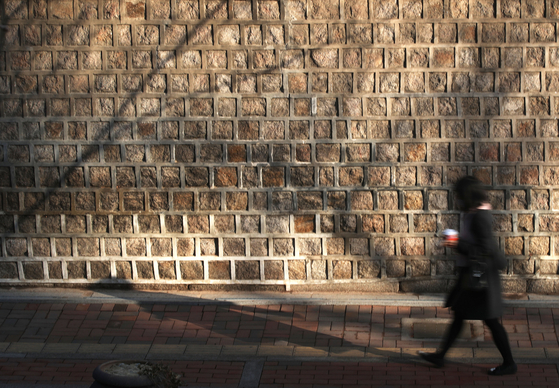 A path part of the stonewall walkway outside of Deoksu Palace in central Seoul on March 3. [YONHAP]

The pathway behind Deoksu Palace and near the U.S. diplomatic residence in Seoul is getting a makeover as of Monday.

“The path in question is located behind Deosku Palace, which is lined on either side with low stone walls that makes it a popular site among tourists and even local office workers looking to take a short walk during lunch breaks,” the Seoul Metropolitan Government said in its statement Monday. “However the pathway has been found to be too narrow and at times congested with vehicles that could make the walks unpleasant and even dangerous.”

The pathway being renovated is comprised of two roads.

One begins near the back entrance of Deoksu Palace, near the diplomatic residence of the U.S. ambassador, and stretches north, past the entrance of King Gojong’s Road, to the rotary in front of Seoul Deoksu Elementary School.

The second part stretches east from the rotary to the Donghwa Duty Free Shop.

The two roads, totaling some 1,050 feet, will be renovated to become more pedestrian-friendly by June, according to the city government. 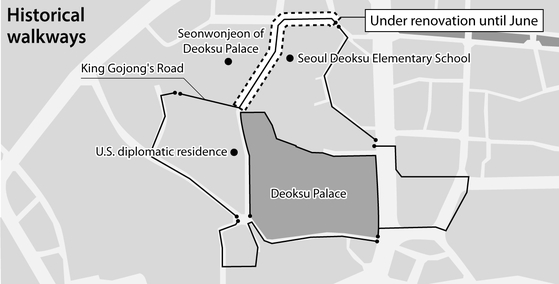 The renovation is part of the city government’s project to designate five historical themed walkways around Deoksu Palace.

The renovated road and King Gojong’s Road make up one of the five walkways. It passes by Seonwonjeon of Deoksu Palace, where the former kings' portraits were enshrined, which is set to be restored by 2038, according to the Cultural Heritage Administration (CHA), Korea’s authority on cultural heritage.

The city government in cooperation with CHA has been renovating several historical roads in recent years such as King Gojong’s Road, which opened in 2018. The road is part of the path that King Gojong took during his escape from Gyeongbok Palace, surrounded by Japanese troops, to the Russian legation building in 1896.

The stone wall walkway around Deoksu Palace that used to be disconnected in some 170-meter section connecting the front and back gates of the British Embassy became fully available in 2017, after an agreement was reached by CHA, the Seoul city government and the British Embassy.