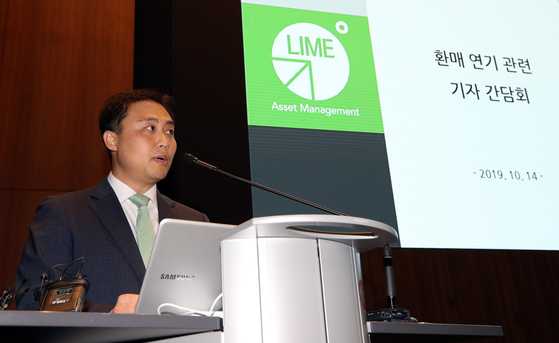 Lime Asset Management CEO Won Jong-jun announces that the asset management company was suspending redemptions during a press conference held in Seoul in October 2019. In January 2021, the court sentenced Won to three years in prison and a fine of 300 million won. [YONHAP]


Regulations on private equity funds have been tightened in order to prevent another Lime Asset Management, which employed Ponzi-like practices and inflicted great losses on Korea.

Top on the list is a restriction on the trading of investments between related funds.

Lime investors lost an estimated 1 trillion won ($890 million). The fund has been accused of manipulating returns through cross trading, with one Lime fund selling convertible bonds to another Lime fund.

Lime was once Korea’s No.1 hedge fund.

The FSC said the goal is to prevent trouble at one fund from being transferred to another.

In principle, the financial regulator is banning cross trading altogether, but there are a few exceptions, such as in cases where the financial maneuver is undertaken to protect investors.

One of the conditions for cross trading is to get a fair value estimate of the assets being moved from an independent institution, such as an accounting firm.

Lime may have been able to hide the actual size of its insolvency as it was difficult for investors to know the fair value of non-marketable assets.

The FSC said it will limit cross trading to 20 percent of a fund’s assets.

The FSC is also limiting the leverage for total return swap (TRS) agreements between asset management companies and brokerage firms to 400 percent of the fund’s value.

Under the contracts, the TRS payers, which are mostly the brokerage firms, purchase the underlying assets. However, the profits are completely pocketed by the TRS receivers, which are asset management companies.

The problem is when the leverage becomes excessive and the private equity fund has to suspend redemptions to investors as it struggles to pay the brokerage firms, which was the case with Lime.

Lime investors strongly protested TRS contracts, which allowed brokerage firms to retrieve principal from the failing fund, while retail investors were left to pick up the scraps. This resulted in some investors unable get a single won back.

The financial authority will also heighten scrutiny of funds to make sure they are not misrepresenting their strategies. While this is already against the regulations, enforcement has been weak and some managers have failed to property explain their funds.

Under the new regulation, asset managers that makes investment decisions different from what they had told investors will face penalties, including fines of up to 50 million won.