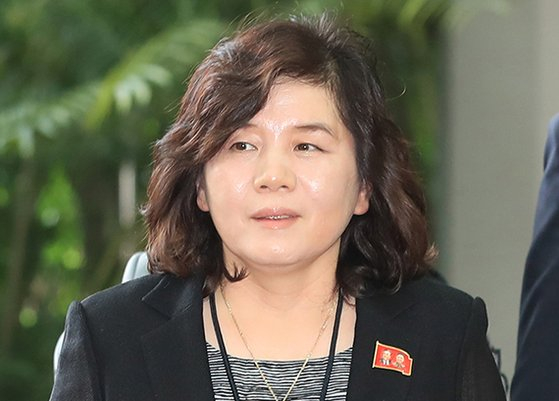 
Pyongyang confirmed Thursday that it rebuffed U.S. diplomatic outreach last month, calling it a “cheap trick,” and will disregard future attempts unless there is a change in attitude by Washington.

“The U.S. has tried to contact us since mid-February through several routes including New York,” said North Korean First Vice Foreign Minister Choe Son-hui in a statement Wednesday carried by the North’s state-run Korean Central News Agency (KCNA) Thursday. “But we don't think there is need to respond to the U.S. delaying-time trick again.”

The White House Monday confirmed reports that the Joe Biden administration had reached out to North Korea through “a number of channels” in mid-February to reduce the risk of an escalation of tensions. This includes through the so-called New York channel, or diplomatic missions at the United Nation in New York.

Choe in her statement elaborated that the United States had sent e-mails and telephone messages, adding, “Even in the evening before the joint military drill it sent a message imploring us to respond to its request through a third country.”

She was referring to an annual springtime joint military exercise between Seoul and Washington that kicked off on March 8 and will conclude its nine-day run Thursday. Pyongyang views such exercises as war rehearsals and Choe criticized the drills, which have been down-sized because of the Covid-19 pandemic.

Choe statements came as U.S. Secretary of State Antony Blinken and Defense Secretary Lloyd Austin are in Seoul for talks Wednesday and Thursday to discuss a coordinated strategy on North Korea and alliance matters.

She called on the United States to “drop the cheap trick” of trying to use North-U.S. contact “as a means for gaining time and building up the public opinion.”

Choe stressed that North Korea won’t be providing “such opportunities as in Singapore and Hanoi again,” referring to two summits between North Korean leader Kim Jong-un and former U.S. President Donald Trump in June 2018 and February 2019.

“We have already declared our stand that no DPRK-U.S. contact and dialogue of any kind can be possible unless the U.S. rolls back its hostile policy towards the DPRK,” said Choe. “Therefore, we will disregard such an attempt of the U.S. in the future, too.”

DPRK stands for the North's official name, the Democratic People's Republic of Korea.

Choe led working-level negotiations over denuclearization with the Donald Trump administration. Negotiations have been at an impasse since the collapse of the Hanoi summit.

Choe said it will “only be a waste of time to sit with the U.S. as it is not ready” for change while criticizing Washington’s “groundless rhetoric” urging the North’s “complete denuclearization.”

She threatened that Pyongyang “will readily react to the sanctions leverage” raised by the Washington and criticized the Biden administration for raising the possibility of additional pressure on the North.

Choe indicated Pyongyang was mindful of a comprehensive review underway by the Biden administration of North Korea policy. She accused Washington of hindering humanitarian aid in the midst of a pandemic through “thoughtless words.”

However, Choe noted “In order for a dialogue to be made, an atmosphere for both parties to exchange words on an equal basis must be created,” leaving a door open to negotiations.

Kim Yo-jong, the powerful younger sister of North Korean leader Kim Jong-un, cautioned the Biden administration to “refrain from causing a stink at its first step” in a statement published Tuesday in protest of joint military drills between Seoul and Washington.

This was the North’s first public message to the United States since the launch of the new administration.

“The authoritarian regime in North Korea continues to commit systemic and widespread abuses against its own people,” Blinken said. “We must stand with people demanding their fundamental rights and freedoms and against those who repress them.”

On Pyongyang’s recent threats, Blinken said in a joint press conference with Seoul officials Thursday, “I'm aware of them, but what I'm most interested in right now are the comments, and thoughts, of our allies and partners.”

Chung during the press conference also addressed Kim Yo-jong’s statement and said, “It appears to reflect that North Korea is closely monitoring the high-level talks between Seoul and Washington amid the U.S. review of its policy on North Korea.”

He added that North’s intentions were briefly discussed in the foreign and defense ministerial meeting with U.S. counterparts, adding, “The South Korean government continues to support the Biden administration's efforts to contact North Korea and hopes that negotiations for denuclearization between the United States will resume as soon as possible.”