Private label credit cards (PLCCs) are emerging as an area of focus for card companies, as commissions dwindle and the harvesting of customer data seems to be the best way to drive future growth.

A PLCC is a credit card designed with the benefits and rewards from a specific brand.

Under the branded card partnership, a credit card issuer and a brand work together on the entire process of credit card development from planning to branding and marketing. The two parties also share profits generated and cost incurred.

A PLCC by Hyundai Card and Starbucks Coffee Korea comes with extensive reward benefits centered around the existing Starbucks Rewards program, such as digital stamps for every 30,000 won credit expenditure on the card.

While Hyundai Card has been early in rolling out PLCCs in the local market, since 2015, competitors have started releasing PLCCs as they seek new sources of profit. 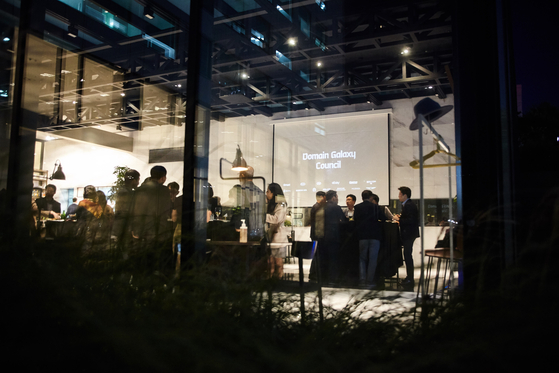 Representatives from companies in private label credit card partnerships with Hyundai Card gather to discuss how to extend their agreements for future marketing in October last year, at the card company’s headquarters in Yeouido, western Seoul. [HYUNDAI CARD]

Hyundai Card is strengthening its PLCC business even more by quickly expanding the number of partners. While it already operates PLCCs with 11 brands, including Emart, Hyundai Motor, eBay Korea, Costco, Korean Air and Starbucks, it recently inked partnerships with Naver and fashion commerce platform Musinsa to release PLCCs.

A Musinsa-branded PLCC will be made available in the first half of the year, while the start date of a Naver-branded card, which will include benefits related to the company’s online commerce platform, has not been disclosed yet.

Other card companies have been making efforts to partner with big-name brands for the release of PLCCs over the last year. Hana Card partnered with mobile payment app Toss for a Toss-branded PLCC in April, and Lotte Card introduced an NHN Payco-branded PLCC in June.

The major reasons for card companies to roll out PLCCs with large-name companies in different industries is to save costs and come up with new sources of profit.

Profit from card commissions, which used to be a major source of profit for card operators, has been shrinking as card commission rates have been declining mainly due to government's drive to help small businesses.

As the coronavirus pandemic has largely hurt small businesses, there are already discussions by financial regulators on whether to further lower card commission rates this year.

Card companies are betting on data to come up with a fresh business model that could become their new reliable source of profit, and PLCCs are believed to be a cost-effective approach to access more data.

Partnerships with already well-known brands can also help card companies attract brand fans as cardholders. A larger consumer base means more data, which is a crucial resource for companies seeking to analyze consumer patterns and lifestyles.

The success of PLCC business model will depend largely on what card companies do with the data collected.

The largest PLCC business operator, Hyundai Card, gathered executives from all of its partners in October last year to discuss on how to extend their partnerships further.

"We aim to plan marketing strategies based on data we analyzed and make offers [to our partners]," Kang Byoung-wha, head of PLCC planning department at Hyundai Card, said during the meeting.

A spokesperson from the card company said that it has been recruiting data scientists to strengthen its data analysis, and it hopes to play the role of a liaison between its partners so its partners can run marketing together using the analyzed data.

For instance, they can offer Hyundai Motor and Starbucks opportunities to run marketing promotions at certain times or in certain regions where co-marketing can be effective based on their data analysis.

Big data consulting is what other card companies, like Shinhan Card and Samsung Card, are focusing on as their new growth engine.

"PLCCs have many advantages for card issuers as they greatly reduce costs in marketing and enable them to grant more benefits related to a specific brand," said Jang Myeong-hyeon, a researcher at the Credit Finance Research Institute.

Jang warned that companies should closely monitor consumers as PLCCs could pose greater risks as shown in the United States where the PLCC business model was introduced earlier. In the U.S. the growth of PLCC cards have stalled as the cards have shown a high level of outstanding balances over time.