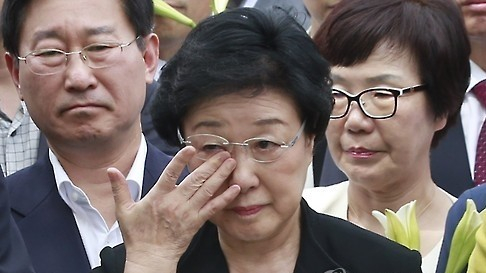 
The Supreme Prosecutors' Office decided Saturday to not seek indictments in the case of alleged perjury involving a witness who testified against Han Myeong-sook, a former prime minister convicted of accepting political slush funds.

The Supreme Prosecutors' Office reported its decision to the Justice Ministry on Sunday.

The conviction of Han, who became Korea's first female prime minister under President Roh Moo-hyun and led the Democratic Party (DP) during its wilderness years through the 2012 general election, has become a cause célèbre for progressives, who view her as a victim of prosecutorial bias and meddling in politics.

Prosecutors reached their conclusion after a marathon meeting of nearly 12 hours on Friday. Their decision effectively closes the door to re-visiting the scandal and rehabilitating the former prime minister.

Earlier last week on Wednesday, Justice Minister Park Beom-kye invoked his authority to order the Supreme Prosecutors' Office to re-examine allegations that prosecutors in 2011 pressured a fellow inmate of Han Man-ho, an imprisoned construction businessman, to commit perjury by testifying that they heard the businessman say he gave the former prime minister 900 million won ($800,000).

In their vote on whether to indict the businessman's fellow inmate on charges of perjury, 10 senior prosecutors voted to not indict, while two voted for an indictment and two abstained.

Only the fourth such directive in Korean history, Park's command came just five days before the statute of limitations for the case was set to expire on Monday. Had prosecutors decided to serve an indictment before the deadline, it could have reopened a legal battle over prosecutorial bias in the case.

Although the businessman, now deceased, originally said under investigation in April 2010 that he gave the former prime minister money, he later recanted his testimony in court, claiming that he was forced to give the false testimony under pressure from prosecutors.

The Supreme Court also rejected the businessman's attempts to backtrack his testimony, deeming it unreliable.

However, in May 2020, the businessman's fellow inmate submitted a court petition claiming that he was told by prosecutors to claim he had heard Han saying he gave money to the former prime minister.

Although former Justice Minister Choo Mi-ae ordered the Supreme Prosecutors' Office to re-investigate the inmate's allegations that prosecutors had encouraged perjury, the probe wrapped up on March 5, with no charges being recommended by prosecutors.

The latest decision by the Supreme Prosecutors' Office to not seek an indictment in the case led to more calls from progressive politicians to defang the state prosecution service by removing its investigative powers entirely.

"Once again, the state prosecution service has demonstrated just how good it is at protecting its own. This confirms why prosecutorial reform must continue," wrote DP Supreme Council member and National Assembly Rep. Shin Dong-kun in a Facebook post.

"It has become even clearer that investigation and indictment powers must be separated."

Meanwhile, members the main opposition People Power Party (PPP) called on the justice minister to resign over his order to prosecutors to reopen the investigation into the Han Myeong-sook case.

"Justice Minister Park and the DP ignored the rule of law in their attempt to rehabilitate former Prime Minister Han," said Kim Do-eup, a PPP member of the Legislation and Judiciary Committee of the National Assembly.

"He should take responsibility for confusing the nation and the people with his misjudgment."