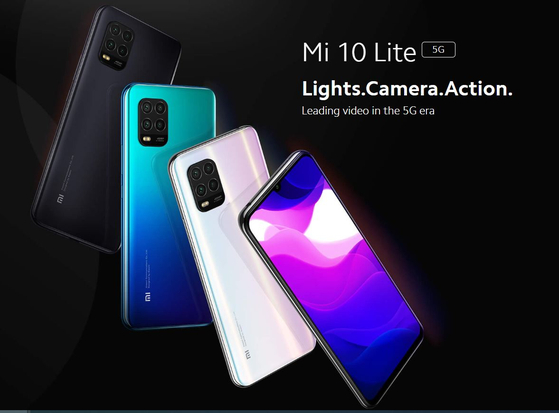 
Chinese manufacturer Xiaomi will roll out a 5G-enabled smartphone in Korea next week, hoping to build a presence in the homes of Samsung and LG with its competitive prices.

Xiaomi's Mi 10 Lite 5G smartphone will be launched next Friday after a four-day order period, sources said. It is expected to be priced around 450,000 won ($375) — the cheapest among 5G smartphones available in Korea.

The device will also be the first foreign 5G smartphone in South Korea. (Both Samsung and LG offer 5G models).

SK Telecom will accept orders between July 13 and 16 and officially start sales on July 17, the same day as will LG U+. KT hasn’t decided whether to sell the model.

SK and LG U+'s brick-and-mortar retailers will not offer the new smartphone. Customers will have to buy them through online shopping malls. Xiaomi previously released LTE smartphones, such as the Redmi Note 9, in Korea.

So far, the cheapest 5G smartphone model in the country is the Samsung Galaxy A51, which was launched in May for 572,000 won.

"Although the Korean market is centered around premium smartphones, demand for budget handsets has been increasing, so it is likely that Chinese makers will keep trying to enter the market," said Roh Kyoung-tak, an analyst at Eugene Investment & Securities.